Is there such a thing as reincarnation? That, or do ghosts exist, is a question that crops up fairly regularly over dinner with friends. My answer is ‘I don’t know’ – then I tell them about my childhood recurring dream……

I walk up a long driveway and turn around a bend and there it is in front of me: the most perfectly proportioned house, typical of the sort a small child might draw. Then, in that disjointed but alright sort of way of dreams, I am at the back of the house. There are two arched windows with soil silted halfway up their frames.

I wriggle through the opening and drop to the floor, a few feet below. Standing up, I see I’m in a small circular room and, above me, see that the ceiling is cloistered like in an old abbey building. And then I wake up and feel so warm and good inside that I’m happy all day.

Year after year, I dream of this until my late twenties when, one day, I decide to draw the house, but I can only draw it as as a child would. The spell is broken and I never dream it again. And then 17 years later I go for an interview for a position as Head Gardener and find myself walking up a long driveway, turn around a bend and….I get the job.

Supplying pot plants and cut flowers for inside the house is all part of everyday working life and I find myself in a small circular room looking out of the half windows with their arched tops. The ceiling is plain plaster. ‘How disappointing’, I say as I tell the owner about the cloister. The ceiling is false, the house, after tragedy, had become a convent, the adjoining room was a chapel, who knows what is above the ceiling?
Apparantly, the son, an only child, died just before the house was completed. The obelisk at the front of the property was built to commemorate him and the parents moved away. And so, in the 21st century, so did I – reluctantly in some ways – to be with my new partner to live in the Cotswolds and a new career as a garden designer. 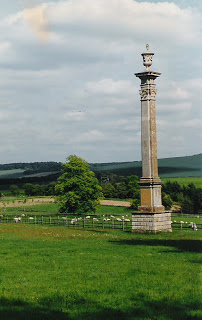 The house won’t let go. Several weeks later I am asked to return on a regular basis as an adviser and I have been travelling there ever since – the last time to supervise the planting of lavender hedges and, when I return, I still get that warm, contented and happy feeling. Do I believe in reincarnation? I’m far too much a sceptic to say ‘yes’ but there are too many coincidences to give an emphatic ‘no’….. 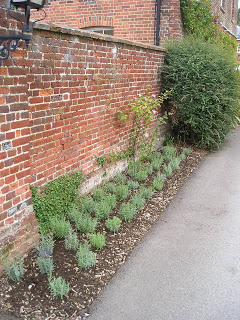 Update June 2014: an even more bizarre twist to this tale has arisen – read about it by clicking on the link here