You can’t get away from stone in the Cotswolds for all the old houses are built of it – and some of the new ones too. It is the stone that gives the villages and towns their beauty and what brings tourists by their thousands to visit the region. 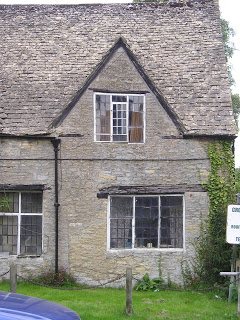 But it is the walls dividing fields and gardens that are perhaps the most iconic of all the Cotswold scenes. Probably nothing more than heaps of stone thrown to one side when the fields were first cleared, centuries ago, it was the obvious choice for building and permanent too – a good stone wall lasts for decades with virtually no maintenance. However, neglect took its toll. 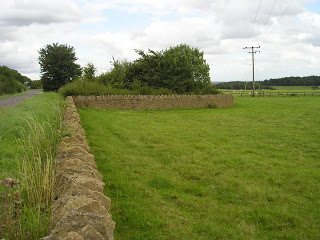 A dying art, the old stone walls fell into disrepair until recently when, with an upsurge of interest, building of new walls and repair of the old, has seen the work revived. New, younger blood learning the skills from the dwindling number of ‘wallers’ and with classes available to anyone, means that for the time being at least, the craft seems safeguarded for the future. Here a new walled garden – the classic feature of the English country house – is being created.

The use of a timber frame as a guide creates the ‘batter’ – the name given to the sloping sides that gives the wall stability. The photos below shows the frame and a new wall being built. Modern techniques tend to use a bit of mortar at the base and also cementing in of the ‘header’ stones along the top. The latter is partially to make the wall more weatherproof (how the old timers would shake their heads at that!) and also to prevent theft of the stone, which is expensive and does disappear at times. Sometimes, the headers are left off altogether and a concrete cap is placed instead which soon weathers down to give an acceptable appearance. 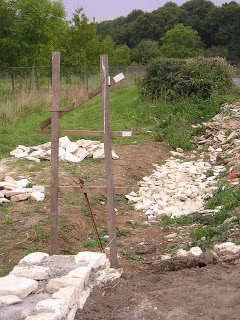 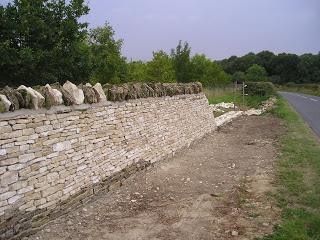 Our garden in the secret valley has a wall that has stood for over 150 years, below. It will be many years before new walls have the depth of colour and the mosses and lichens of this one.

And, so far (touch wood), our traditional wall has never had its stones stolen, despite every piece of it being ‘loose’. One of the joys of this wall is that it is full of wildlife from small bugs to wrens nesting in the crevices and even the occasional stoat and weasel looking for mice. 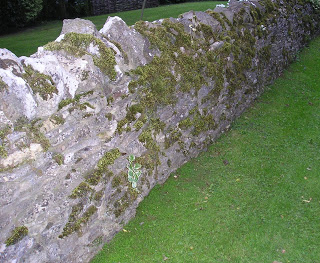