As night falls we have started hearing the sound of tapping at our garden door. It happens every year as the weather begins to warm up and the days draw out. At first we were uncertain as to what it was for there was no-one there when we looked outside. Yet, as soon as the door was closed, the gentle knocking sound would start again.

No, this is not the start of a scary story for on one occasion, leaving the door open a little longer than usual, into the house jumped a large frog, followed by several more. Now when we hear the sound we know that the frogs (and some toads) are on their march to their spawning grounds. Unfortunately this involves them crossing the little country lane just below our house and, although traffic is few and far between in the secret valley, each morning there are the squashed bodies of those that didn’t make it to the other side. The photo below may look as if it’s squashed but this one survived! 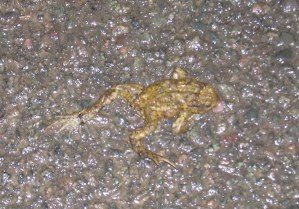 Quite why the frogs cross here is a bit of a mystery. The river is below and to one side of us as it meanders through the valley and around the house. The frogs are coming from the field up on the hillside and this isn’t a nice, moist and lush grass field that might be a bit of froggy heaven. The field they come from is plough – stony, brashy and rough. Or have they been hibernating in the old hedgerow and, if so why, when there are plenty of, what would appear to be, more attractive and comfortable places to sleep? Whatever the reason, they are off back to the river and pond and our house is in their way. If the doors are open, a constant flow of ‘hoppers’ pass through the sitting room and kitchen – or around it as we tend to keep them out. When our little cottage was built 150 years ago, was it built on an ancient pathway created by thousands of generations of frogs? 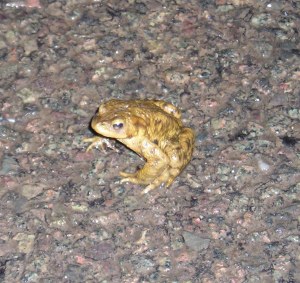 Oddly enough, on Exmoor, despite its harsh climate, the frogs spawn earlier than here in the secret valley. On a walk recently, we found this perfectly formed circular pond (perhaps an old sheep wash) on the moor and the frogs had already filled it with spawn. And in every boggy patch of the moor we found even more spawn. It rose above the water level in great mounds: perhaps it is the higher rainfall that prevents the spawn from drying out. However many frogs must there be and how many tadpoles will survive to return to breed in the future? The answer is mind boggling! 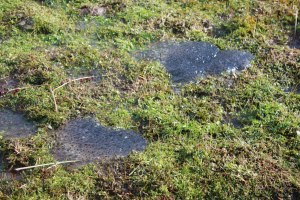 An update 27th March:
The frog march has ended as they have reached their destination. When I walk past the large pond that has been formed by a breach of the river banks, the noise of croaking is amazing. Everywhere you look there are frogs and toads amongst the submerged vegetation. In the last 36 hours spawning has commenced – we have snow showers forecast over the next few days but, hopefully, it won’t affect the spawn too much.