One of the best aspects of living in the secret valley, (apart from being unknown, of course), and living on a relatively small island, is that we aren’t too far from anywhere. We can travel north, south, east and west with comparative ease and one of the nearest cities is Oxford. 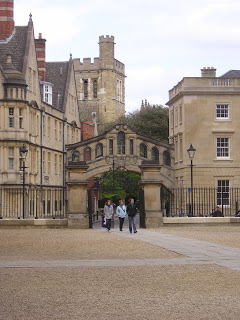 Oxford is so steeped in the history and daily life of the Universities that it is generally forgotten that it has another side to its personality – but that will have to wait for another post. It was to Oxford, thanks to Kellogg College, that I found myself in the Sheldonian Theatre last Monday afternoon. If the word theatre conjures up a vision of red velvet curtains and plush velour seats, think again: The Sheldonian was designed by Sir Christopher Wren, perhaps our greatest architect, around 1664 to provide a suitable venue for ceremonies associated with the University. It is still used for this purpose and for lectures and the seats – benches – are hard and unforgiving. However, it is a masterpiece of design and, also by being circular, it is possible to see the platform uninterrupted by the heads of other people or by pillars. 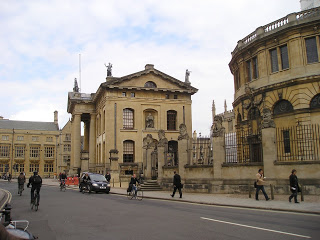 When a friend asked if I would like to attend a lecture given by Archbishop Desmond Tutu I thought it must be joke as surely all places would be allocated. They were and we were amongst those that were priviledged to attend. Archbishop Tutu is a person I have admired for many years – for how can someone (or a people) that have suffered so much indignity and hardship be so forgiving? This was the subject of the lecture: Lessons From the Truth and Reconciliation Process for 21st Century Challenges. The transcript and video is not yet available but a similar lecture given in the States can be seen here.
Call me an old softy, but my initial reaction when the Archbishop walked into the centre of the building was to want to burst into tears, such was the emotion in seeing him in person. And when I looked around at the audience, many were wiping their eyes, both men and women, young and old.
.
Archbishop Tutu talked about the hardship that his people had suffered through the dreadful years of apartheid (I’m ashamed to say, that the British government didn’t give much assistance). In his characteristic tone of voice – sometimes high, sometimes low – he pointed out many of the everyday insults that arpartheid brought: the designation of race (black or coloured) by having a comb run through your hair. Of being denied medical treatment, so many things. He told harrowing stories of both blacks and whites being murdered during the armed struggle.
And also, after a long pause, as the horrors were absorbed, his high pitched laugh would bring the story to a close with a quip or a gesture. And he made us laught at ourselves too, which always has to be a good thing!

But the lecture wasn’t all about horror – in fact, horror (although plenty of it) was not the overwhelming feeling. That feeling was of joy and of love and of hope and that has to be great, in the biggest sense of the word, for we all need to be reminded that much in the world is good – don’t we?
.
.
.
.
.
.