One of the pleasures of living on a small island is that you are never far from anywhere – except another country (apologies to Wales and Scotland, I know that you are proud of your separate identities and rightly so).

So last Friday I spent at home in the Cotswolds – limestone country, wide open views and rolling pastures. Saturday I spent walking across Dartmoor (post to follow) – granite country of bleak, open moorland and few trees. Today I spent walking in the Chiltern Hills, my birthplace, a chalk country, densely wooded and secretive. All are beautiful in their own way.

And today was especially special for I was on a mission: looking for rare plants. And with some success, although just as much delight was found in the more common ones, for seeking pleasure from rarity for rarity’s sake is a poor emotion. What could be more charming a discovery than this group of foxgloves in a woodland glade? A common enough plant: I prefer the wild to the garden varieties, that have been bred to have ever larger ‘cups’. Here, the wild plants have a grace and delicacy that is so unlike their brasher relatives.

The group of thistles didn’t seem to be of special interest other than for the pleasure of watching the bumble bees feed from their flowers. But when seen in close detail the flowers really are quite spectacular. Most of these were purple but some that, from a distance, appeared to have prematurely gone to seed turned out to be a variant – they had white flowers. How glad I was that I had dawdled and not just rushed past without giving them a second glance!

Further into the woodland and growing in dappled shade was the first of the ‘finds’. Our native Columbine (Aquilegia vulgaris) is not often seen. Many that appear wild are garden escapes and are usually close to roads or houses but these were a long way from either. And, again, the flowers have a delicacy and lightness about them. Ladies Bonnets is another country name for them – it is easy to see why. 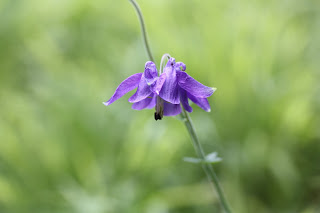 The Narrow Leaved Helleborine (Cephalanthera longifolia) is also uncommon and it was only after this one was found that we realised that there were over forty plants scattered over the area. Like the Columbine, where the plants were not sheltered by scrub or ferns, the deer had eaten the tops off. The flowers remain closed, making them unavailable to insects so, I assume, the plants self pollinate – perhaps that is why they are not at all common.

Further still along the path, was this solitary speciman of Daphne laureola, the Spurge Laurel. Although this plant grows quite widely in the Chilterns, this was the only specimen seen today. It flowers in late winter, it’s greenish-yellow flowers lacking the sweet scent of its garden cousins. Already the berry seedheads are forming, these will turn black later in the year. The Mezereon, a popular garden shrub in the past but not grown so widely these days, is also a native but extremely rare. It is known to grow in the Chilterns although I’ve never found one.

Returning once more to open meadows the woodland gave one last surprise: tall Field Maples, Acer campestre, usually grown as a hedging plant. And this is how it would have started out: one trunk, coppiced and layed to create sturdy, stockproof fencing. The original trunk has long disappeared and the ‘new’ stems from around its base have grown to be trees in their own right. For a maple to be of this size – and they rarely are – it would have been planted in Medieval times and it is known that the field that it borders was first created by the Saxons, 1000 years ago.

And as a grand finale, the meadow gave us dozens of Common Spotted Orchids – only common in favoured places, the spots refer to those on their leaves. The Chilterns are a great place for orchids and are home to some of the rarest species – their sites a closely guarded secret. 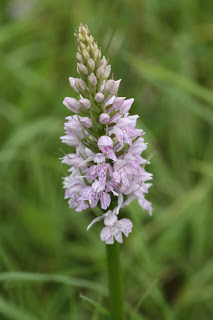 A most successful and satisying day!

8 thoughts on “A Day’s Plant Hunting”