It is a family joke that whenever a large piece of stone is seen, one person asks “What is it?” and the other answers – slowly and after much deliberation and head scratching – “well, it’s a massive piece of granite”. For, many years ago, this was the only answer we got from an old countryman at an ancient stone burial chamber that towered above us.
.
Burial chambers, stone circles and other standing stones, which mostly date back 5000 years or so are reasonably common around Britain,and a surprising number of them are quite impressive. There are several scattered around the Cotswolds and I have written about our little known and little visited Old Soldier and also the very well known and very much visited stone circle, the Rollright Stones.
.

.
The Rollright Stones
.
Far more scarce and, perhaps even more impressive, are the stone ‘clapper’ bridges. These are often not as old as they look although, even these, were probably built the best part of a 1000 years ago. I find these bridges, which are mostly in the West Country on Dartmoor and Exmoor, just as impressive as Stonehenge, England’s world famous ancient stone monument. The clapper bridge in the photoographs below is at Postbridge, on Dartmoor, in the county of Devon. This clapper bridge was built to aid the transport of tin from moorland mines about 1200AD.
. 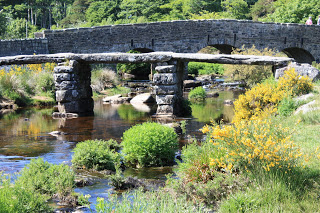 .
The ‘new’ bridge in the background, which carries the road and car traffic over the East Dart river is a mere upstart, having been built about 1780. In the photo below, I love the way the arch of the new bridge is framed by the ‘arch’ of the old one.
.

.
The granite slabs measure over 4 metres (13ft) long and are over 2 metres (6ft 6in) wide and weigh over 8 tons each. Despite this, over the centuries they have been swept away downstream by floods. Some have been rebuilt many times, others lost forever. However did they, without modern technology, transport them?
. 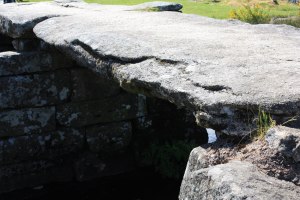 .
The bridge just invites you to step onto it and it can be the starting point of many walks that lead across the open moorland. It was for me, a couple of months ago. On that walk, I found deserted settlements and the most incredible stone circle – unusual in that there were two circles side by side. I shall write more of this soon.
. 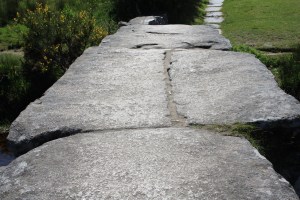 .
Even now, when a special occasion needs to be commemorated it is to stone that we often turn to. To my knowledge, no modern material is in common use to mark the burial place of a loved one: we mark our graves in a very similar way as our most distant ancestors, with stone slabs.
.
We also use stone to mark more joyous occasions. This standing stone was placed on Ibstone Common, high in the Chiltern Hills, to commemorate the millenium. A small thread that unites us through 5000 years of history and far into the future – a comforting thought.
. 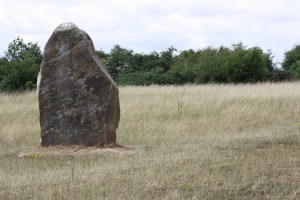 10 thoughts on “"A Massive Piece of Granite"”