As far as butterflies go, the Large Skipper is not particularly uncommon but I don’t recall seeing them in quite the numbers that I have this summer. They are active butterflies, frequently on the move and fast flying but eventually come to rest to feed or bask in the warmth of the sun.
. 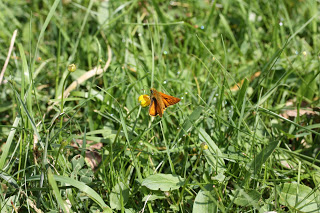 .
The Large Skipper lays its eggs on a variety of grasses and so can be found in many habitats, particularly the edge of woodlands and along woodland rides. The photo below, taken in the deeply wooded Chiltern Hills, may look like a woodland ride but it is an ancient Saxon field or ‘assart’. Assarting – the destruction of forest for agriculture – was considered to be one of the gravest crimes of all when carried out in any of the Royal Forests. This field still has remains of old coppiced or possibly of layed hedge – there is one Field Maple, Acer campestre that probably dates back a 1000 years to Saxon days. It now consists of a series of smallish trees around the space where the original trunk would have been.
.

.
Despite its name, the Large Skipper is quite a small butterfly. The females, which are slightly larger than the males, have a wingspread of less than one and a half inches. Their diminutive size has not prevented them from spreading far and wide globally: they can be found from England in the west of Europe, right across the continents, to Japan in the Far East. For some reason they are not found in Ireland or most of the Mediterranean islands. However, their range is still spreading so perhaps they will colonise these places too one day.
. 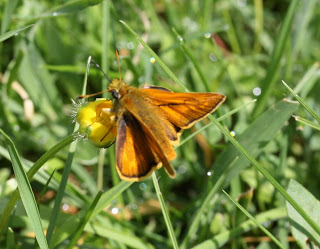 .
The golden glow of these butterflies gives them a certain charm but they can not be described as pretty, especially with their huge, bulbous eyes. This glow is also present in the underside of the wing which shows up faint spots and helps to distinguish them from the Small Skipper and the Silver Spotted Skipper, both of which are to be found in Britain but far less frequently. The latter, incidentally, is also found in parts of North America.
. 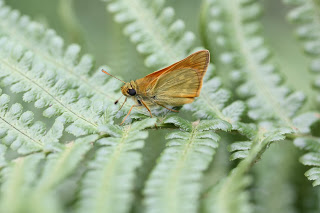 .
Another golden butterfly, but this time a very attractive one, is the Comma. It is everything the Large Skipper isn’t – delicate, attractively marked and large. This butterfly was rare when I was a child but numbers have increased rapidly in recent years and it is now no longer considered endangered.
.

4 thoughts on “The Large Skipper and a Comma”