If ladybirds landing on you are traditionally a sign of good fortune to come, I wonder what the latest invasion of hundreds of them coming to hibernate in my bedroom means? Probably not much as I have evicted the majority of them! However, there is something rather special when a wild creature, however small, chooses to associate closely with you and without fear.
.

.
Now I appreciate that a small bug like creature is not exactly prone to a shaking attack of nerves when a human face peers closely at it – not even mine – but they must have some sense of concern when we recite the children’s rhyme “Ladybird, ladybird fly away home”, surely?
. 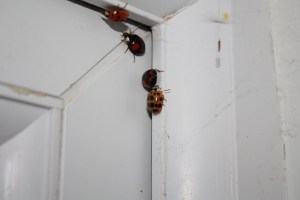 .
Having realised that they are likely to get ‘crunched’ once the window is shut, they moved further indoors following one another in single file. Of some concern, was the number of Harlequin ladybirds, a foreign invader originally from the Far East but brought here to Britain on plant imports via the USA. These only arrived in the country as recently as 2004 and are now found in every English county, much of Wales and beginning to colonise Scotland. Of the four ladybirds in the picture above only the top one is our native Seven-spot Ladybird.
.

.
I know it’s a bedroom but I really don’t think I want this Harlequin to perform in front of the neighbours! As, to my knowledge, they don’t hybridise with our native species I suspect that this Seven-spot was about to become a tasty snack. This photo really makes you appreciate the difference in size between the two species.
.

Having reached a suitable corner they begin to jostle for position, gradually forming a tight clump where they remain during the colder days and nights. Strangely, the central heating system has no effect on this dormancy, whereas a return to milder conditions outside makes the colony disperse around the room to reform at a later time.
.

.
Now a tight cluster, these groups began to hold several hundred individuals. It was then (and without even bothering to take a photograph, very remiss) that the eviction process began until just a few dozen – which we consider manageable and charming – remained. Despite claiming not to be remotely superstitious, for safety’s sake I did recite the traditional chant.
.
“Ladybird, ladybird, fly away home, for your house is on fire and your children will burn”
.
.
.

6 thoughts on “Invasion of the Ladybirds”