It is a busy time in the garden as the weather at the moment is quite mild and dry. This is an unusual combination for an English winter as warmer winds that come from the Atlantic Ocean also bring rain. It is the bitingly cold weather that comes from Eastern Europe or sweeps down from the Arctic that often brings dryness (and, if lucky, sunshine) with it.
. 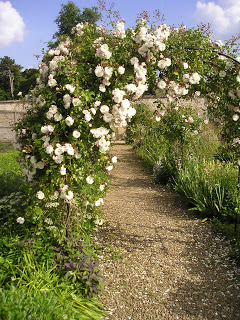 This photo is here because of the gravel path but the roses do offer a hope of things to come!
.
So I have been industrious with my digging, my pruning and my raking. And it is especially with the raking of the gravel paths that I often come across the footprints of history. No more than 10mm across, for they will have been graded along with the stones from whence they came, I find them quite regularly – although you have to train your eye to spot them. These are, I think, Tetrarhynchia, a fossil Brachiopod dating from the Jurassic period 200 million years ago.
.

.
But how did a marine bivalve come to be here high up in the Cotswolds, for the quarry from where the stone came from is several hundred feet above sea level and as far inland as it is possible to be in the British Isles? Most of southern Britain at that time was a vast, warm and shallow sea which, as it gradually drained and compressed created the limestone rocks and shales that give the Cotswolds their beautiful pale coloured stone that many of the local properties are built of.
. 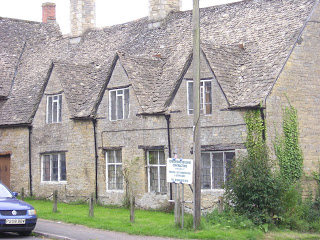 .
Over the millenia , through movement of the Earth’s plates, the surface was pushed upwards to form the chain of limestone hills that is renowned for it’s beauty and, of which, the secret valley, is a tiny – but very special – part of.
.
Sometimes, when I am digging I come across other fossils and, because I am working on the soil, these are much larger than our gravel finds. Usually these are fragments but my best find to date has to be this piece of rock with three Venericor huddled together. These are relatively recent fossils, from the Palaeogene period, just a mere 65 million years old!
.

Also quite commonly found in the region are fossilised Sea Urchins which are so unchanged from those today. These also date from around the Jurassic period. My specimens aren’t especially good ones for the best have all their markings still in place. If you look carefully, there is a sign of one of the five ribs that most sea urchins have. Locally these fossils, which are quite heavy, are called ‘Shepherd’s Crowns’. They make good paperweights!
.

I only have ever found one ammonite and then, only a small chunk of it. However, this was the very first fossil I ever found when I was still a child, so is my ‘very special’ one. At the time I had no idea what it was but it is part of the coiled tube that forms the outer shell. The ‘shadow’ of its ribs can be seen at one end. It would have lived about 200 million years ago.

This small fossil was given to me as a gift and has been highly polished. It is a Belemnite, a type of squid that lived about 150 million years ago. It came from the Atlas Mountais in northern Africa. Although I love its colouring and smoothness it doesn’t give quite the same thrill and sense of awe that finding your own does: how extraordinary to be able to handle something that is of such an incredible age.

.
Depending on my mood, finding fossils gives me hope for the planet’s future or fills me with despair at what mankind is doing to it. Fortunately, by nature, I am an optimistic person so I like to think that Earth may continue even if the human race ends up as dead as the dinosaurs. Let’s hope it continues for it is a very lovely place!
.

.
Indian sandstone paving slabs are so popular at the moment, partly because they look so good for their money. I have reservations about using them for the quality can be very variable and will they stand up to severe cold and frost? We might well know the answer after this winter. I also feel uncomfortable about the labour and air miles involved although I don’t know enough about it to make a qualified judgement.
.
Fetching a premium and on everyone’s shopping list, are the slabs sold at a premium as ‘fossilised’. However, they are not true fossils but are created by crystals of manganes oxide growing in cracks of the limestone. ‘Pseudofossils’ they may be but they do look like the real thing. The fossil equivalent of ‘Fool’s Gold’, perhaps?
. 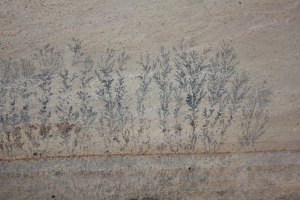 14 thoughts on “Footprints of History”