Horses play an important part of our everyday lives and with my partner having spent a lifetime involved with riding for both pleasure and competitively, it is not surprising that so many of our friends are ‘horsey’ too.

I took up riding rather late in life compared to most and although I’m a competent rider, I’ve never been tempted to do anything that remotely involves winning a rosette.  I value my life too much.  However, if I thought I could skip the rosettes part and go straight into winning big prize money, I might just give it a try…

Over the years I’ve had my share of falls – this is a good thing for it means that I can recount them at every available opportunity.  Horse fall stories are rather like fisherman’s tales – it isn’t just the fish that get larger with every telling, so do the fences, gates and hedges where I met my comeuppance.  The story, for example, where I managed to fall off twice jumping a set of rails: the first time I got back on the horse and tried to jump them again  – only to land head first in the biggest pile of cow shit for 30 miles. No embellishments there but actually (and don’t tell anyone) the rails were really quite low.  I probably could have jumped them even if I hadn’t been on a horse.  The most irritating fall story of them all is the time I jumped a hedge to find rather a drop on the landing side. The horse stopped on landing and I sailed straight on, managing to do a double somersault before landing on my feet looking at the other riders jumping towards me.  Irritating because although accurately told no-one, apart from the few that witnessed it, believe it.

One way of ensuring numerous falls and a good way to stack up a whole wad of stories for future dinner parties is to take part in team chasing.  This is, for the uninitiated, where a team of usually four riders jump a cross country course at a hell-for-leather pace against the clock.  The time of the third rider to complete the course is the one that counts.  My partner has done this on numerous occasions but these days we are both happy to watch.

A good friend of ours who is a very successful saddler sponsored one of the classes at the Warwickshire Hunt Team Chase two Sunday’s ago and we were invited to join him and his partner for lunch.  I’m afraid to admit that like most events that include food and drink, I spent more time inside the marquee than on the actual course itself.

These sorts of occasions, rather like any other horse events, are very sociable for it is where a widely scattered country population can come together and meet up with old friends and neighbours and exchange news.  As I sat at the table pondering upon this and how traditional it is – for country gatherings haven’t really changed that much over the years – I also wondered if this was a worldwide  phenomena or whether it was yet another example of British eccentricty.  At that moment I noticed one of the guests was sitting at the table astride a pony  so I decided it must be the latter.  Ok, so the guest and the pony were very small but does that really matter?  Of course not, we wouldn’t have cared if it had been a 17 hands stallion (well, we might just, I suppose). 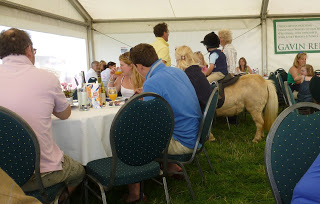 Once lunch was over it was time for the prize giving.  The team in pink,, who came second, were riding to raise money for Breast Cancer Awareness.

﻿
You can see more photo’s of the day on my Facebook page – click the FB icon at the top right of this page to go there – and don’t forget to ‘like’ me at the same time!

3 thoughts on “At the Warwickshire Hunt Team Chase”