There has been a church on the site of Bath Abbey for over a thousand years but the present Abbey Church is relatively new by British ecclesiastical standards.  Building started in 1499 but it was not until the early 1600’s that it was completed.  This was due to Henry VIII’s dissolution of the monasteries in 1539 and the Abbey remained as ruins until 1616 when the church was repaired; the last of the great medieval churches to be built.

Tradition states that the Abbey Church was built after the then Bishop of Bath dreamt of angels descending – and ascending – to heaven.  It is this vision that is first seen as you enter the building carved into the stonework either side of the West Front.  The great flying buttresses were added in the mid 1830’s to strengthen the building after cracks appeared in the tower; at the same time the pinnacles were also installed.

In late Victorian times many of Britain’s churches had their interiors radically altered and Bath Abbey was no exception.  Much was removed – the organ and screen were taken away which has created the breath-taking view down the full length of the church to the Great East Window, also fitted at this time.  Many other windows were fitted with stained glass and that of the west window was replaced.

Perhaps the most striking of all of the church’s features is the stone fan vaulting: that of the nave was also created then to match the earlier ones of the chancel.  It soars to great heights with such delicacy and feeling of light that it is difficult to remember it is of stone – or imagine the many hours of craftsmanship that the stonemason’s must have carried out.

Carving of an earlier date, 1649, is the tomb of Sir William Waller’s wife, Jane.  Sir William fought against the Royalists in the English Civil War and intended to be buried with her.  He was however buried in London. 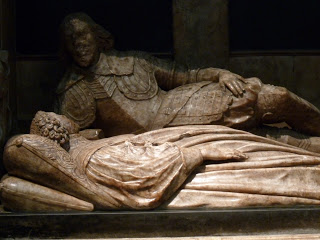 Much of the information for this post has been gleaned from the Abbey Church’s excellent website and pamphlets.  It is a magnificent building and well worth allowing plenty of time to visit for there is much to see.  It is, of course, in the city centre and adjacent to the ancient Roman Baths and Georgian Pump Rooms; these featured in an earlier post which can be seen by clicking here.

4 thoughts on “A Visit to Bath Abbey”