Several years ago I wrote of my fruitless search for my great-aunt.  I hadn’t physically lost her for she had died many years earlier – she was just one, albeit an important one, of the conundrums that constantly arise when researching your family history.

Aunt Baba had left a lasting impression on me when I met her for the first and only time; me just entering my teens, she as an elderly lady of ninety.  Although she certainly was elderly (ancient to my young eyes) she still had the quiet energy and sparkle that had endeared her to my father and his siblings as youngsters.  Perhaps because of the happy visits to her that he would tell me of, I too, adored her instantly.

As youngsters, my father, uncles and aunts, around the time of the Great War,  would travel to Rudgwick, Sussex in what is now the South Downs National Park to stay for short holidays.  There they were allowed to run wild, roam the fields and woodlands and generally be spoilt in a way that would never be allowed by their authoritarian parents.  Brought up as Plymouth Brethren, a strict Christian sect, their usual life was one of bible study, education, chores and prayer meetings.  At aunt Baba’s, although she too was Plymouth Brethren, life was very much more relaxed.  In later years, when I was a child, the Brethren became more rigid and dictatorial about who they could associate with.  My father had rebelled as a young man and as a consequence, contact with us became forbidden.  Family meetings were very few and aunt Baba’s visit was shrouded in secrecy for fear of her being ‘caught’.  Many years later, long after both she and my father had died, I realised I had no idea whether she was a relative or not and my research was drawing a blank. In desperation, I wrote of her  in the hope that someone ‘out there’ might respond.

The blog post (link here) created quite a lot of interest but no hard leads.  It did generate correspondence from the Rudgwick Preservation Society which although useful didn’t produce the breakthrough I hoped for.   Fast forward to a couple of months ago when I discovered a letter from my father’s eldest sister.  In it she told of how, when staying with aunt Baba, she had met her future husband whose parents also lived in the village and were Brethren.  This was the first ‘hard’ fact I had to go on and from there aunt Baba’s story unfolded. 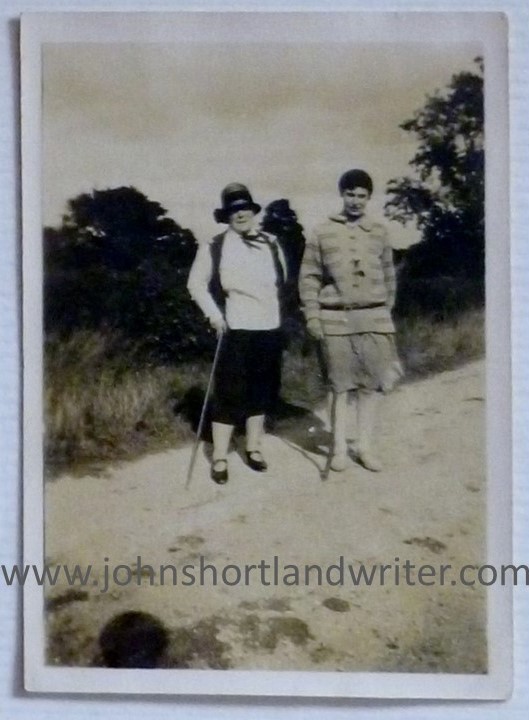 My aunt as a young woman with aunt Baba, about 1924

Born close to midsummer’s day 1875, aunt Baba, who remained unmarried, by 1916 had become housekeeper to an elderly farmer and his son who lived in the wonderful, ancient house of my father’s memory, Greenhurst.  By the time of the Register that was conducted of all households immediately prior to WW2, it can be seen that by 1939 she had moved to a house in the heart of the village.  Within its grounds stood a Plymouth Brethren Meeting House.  Further correspondence with the Rudgwick Preservation Society has revealed that when the son died, (his father predeceasing him by several years), the house had been left to their loyal and long-serving  housekeeper; a wonderful gesture.  By 1943, old telephone directories show that she had moved once more, this time to a smaller house in the same street.  She was still living there in 1953.  She may have continued to reside there after that date but the trail disappears until the record of her death in 1965 – which means she must have died within months of my meeting her. 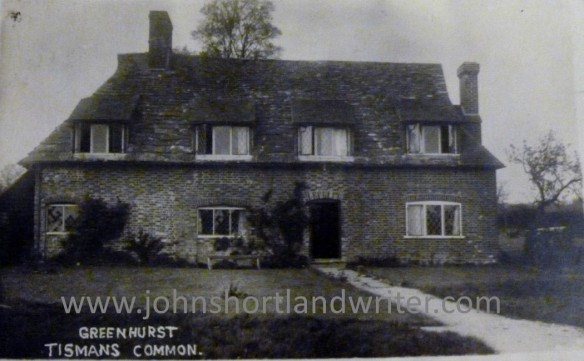 The house where my father ran wild c.1918

The research has revealed that her name was, as I had thought, Frances White, and that she was a close family friend and not a relative.  I am rather sad that she isn’t blood related for, in theory, she doesn’t belong on my family tree.  I have placed her there for posterity anyway as an honorary member, in the process, no doubt, causing some confusion to future genealogists.

Is there more to find out?  Indeed there is, for how on earth did she end up being called aunt Baba?  That is the part of her history that, I suspect, she has taken to her grave.

3 thoughts on “Seek and Ye Shall Find”