Over the years you meet very many people and, if you are lucky, there will be someone who has a major influence on your life, perhaps by changing its direction or outlook. I have been fortunate to have known two such people, one in my teens and the other, in my early thirties. The Colonel was the latter and he opened my eyes as well as my brain to many new ideas and experiences. By the time I met him, he was in his early eighties with a lifetime’s knowledge about so many things especially country life, something I too am passionate about. A great story teller; he had that rare gift of making you feel when in his company that you were the most important person in his life – as indeed you were at that moment. 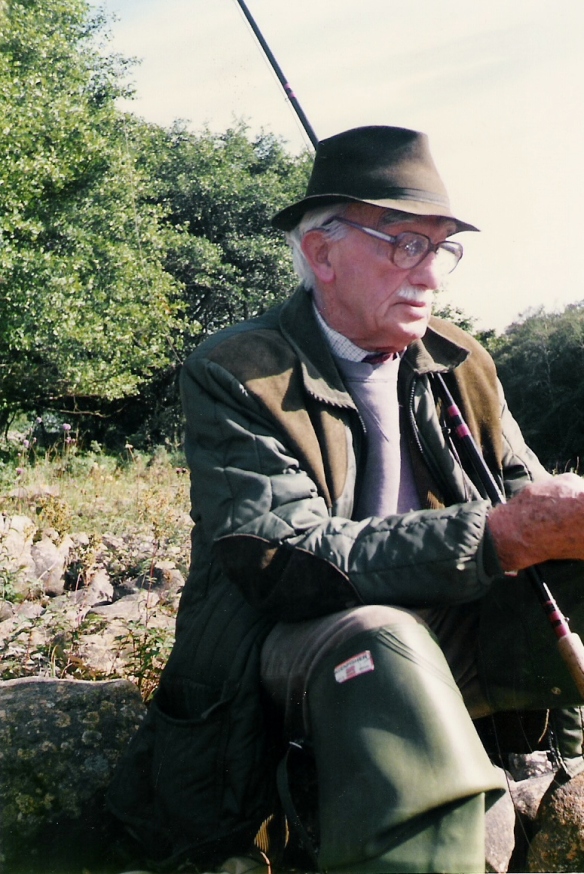 One fine September evening, I walked across the lawns of Woodlands Cottage towards the Colonel. Hosepipe in hand, he was swishing the surface of the swimming pool towards one end, totally engrossed in what he was doing. It was only when I spoke that he became aware of my presence and instantly his face brightened at the sight of a visitor. “Spring cleaning”, he said, “or rather, autumn cleaning. Soon be time to bed it down for the winter”. He pushed aside my apologies for disturbing him and the visit began, as always, with a large whisky and a chat in his snug: a small room lined with books, photographs of his military days, and with comfortable chairs and a writing desk.

I had met the Colonel a couple of years earlier when I moved into his village, six houses up. There had been a knock at the door and before I had a chance to speak, I was asked what religion I was. Before I had a chance to respond I was told that it didn’t matter anyway so long as I turned up at church for bell ringing practice the following evening at 7pm. Although it wasn’t given as a command, I obeyed. Over the years, I found that this natural ability to make people want to do as he requested must have accounted for his success in the army; I could well imagine his men following him into battle just because he asked them to.  This encounter led in time to me taking over a small area of his vegetable garden for my own use as my plot was woefully inadequate in size. The charge for this exclusive allotment was to spend time exchanging news and ideas. Inevitably, the only untidy part of the garden was the one in my care but there was never any reproach for conversation and a whisky were considered to be of far greater importance.

The village church with its weather boarded bell turret

The conversation that autumn evening turned to fishing. I told the Colonel how I had been brought up in a (River)Thames-side village and how I had fished regularly as a lad. When I mentioned that spinning for pike had been a favourite sport he very nearly choked. “Sport?” he spluttered. “The only sport spinning for pike is, is very poor sport! Fly fishing: now that is sport. Not just sport, it is an art and not one easily acquired. Come around next week and I will teach you.” Living in a village high in the Chilterns, a range of chalk hills renowned for its lack of rivers, puzzled I asked, where exactly. “Well, here, of course. Where else did you think we’d go?”

The only natural water in the village is the old dewpond – no salmon or trout in there!

One week later and back in the snug, whiskies in hand, he brought out a selection of rods, each one carefully taken from its cloth case for its individual qualities to be explained.   One of split cane was very old and heavy but exquisitely balanced; another shorter and of fibreglass but a useful addition. Another rod was the one to use in fast flowing water, this one in pools. With each rod came tales of triumphs and failures along with the fishermen and ghillies he’d met over the years. For a while we were both transported to Scotland, to a land of heather hills, lochs and rivers filled with trout and salmon; to evenings in the sporting hotels where the events of day would be discussed and to the elderly Scot who owned the local smokehouse whose secret marinade recipe had died with him. “Salmon has never tasted quite as good since.” We sat in silence for a while until the Colonel leapt to his feet. It was time to start the lesson.

On the lawn, I was shown the correct way to stand. Imagine, I was told, that I’d just hooked my first salmon and then lost my balance. Now to cast the fly. He pointed to a fallen leaf – the fish – some yards away. Effortlessly he cast the line for it to land upon it. I tried but the line just landed a short distance from my feet. I was too tense, I needed to relax or I’d never cast properly. Time after time I tried without success. The instructions came thick and fast. “You’re lifting the rod too high; it’s going over your shoulder.” In desperation, the Colonel took my hand and brought the rod up to my nose. Hit that he said and you’ll only ever do it the once. The advice worked but just when I thought I was beginning to master the technique I was told to change hands and learn to cast with my left.

After two hours the Colonel began to meander across the lawn in front of me. Without warning, he grabbed hold of the end of the line. “What’s happened now?” It took me a moment to realise I’d caught a fish! With great agility for his age he ploughed off upstream, swam across a deep pool, plunged below low, hanging branches and all the time shouting instructions. “Keep the rod high, let the tip take the strain, lower it quickly…” In those few minutes I’d once again been transported north of the Great Glen and felt the exhilaration of catching my first salmon.

“Must be time for a celebration whisky.” Back in the snug the conversation turned to ‘real river’ fishing and then to shooting. Fishing and shooting go together I was told. I confessed that I’d never tried. The Colonel looked delighted. “Good. Next time you call I’ll teach you to bring down some clays.”