….. well, great-Granny actually. I hadn’t exactly lost her for I had ‘discovered’ her in old census records when researching our family history. I also remembered being told, as a child, that “Granny used to live there”. What I hadn’t realised was that Granny and my more distant ancestors were some of the most important mill owners on the River Thames, the premier river of England. The family owned Marlow Mills, which they converted from corn to paper production in the early 1800’s.
.
Marlow Mills survived many mishaps ranging from a very destructive fire to withstanding the riots that were a spill-over from the agricultural riots of the 1830’s. Other mills in the area had their machinery destroyed – the ancestors were obviously made of tougher stuff, for they surrounded the mill with vicious man traps. The traps could still be seen hanging in their offices in the early 1900’s – perhaps as a warning to any other miscreants! What it didn’t survive was the craze for redevelopment and in the 1960’s they were bulldozed and luxury riverside homes built in their place. Sadly, we no longer owned the mill by then: if we had I might be living in luxury for the 17 properties on the site sell now for around one million pounds each.
. 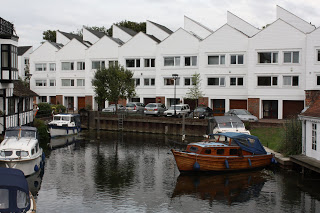 .
Yesterday, I found myself in Marlow on business but, with time to spare, decided to explore. How odd it felt walking these once familiar roads and riverside walks now knowing that two hundred years ago my family were doing the same. This street view probably hasn’t changed much although, as the family were so religious, I can’t imagine that they sat outside the local pub drinking alcohol in the warm, summer sunshine!
. 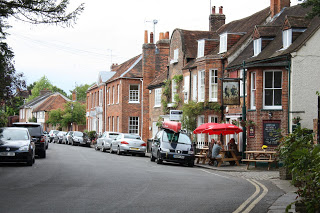 .
The view of the river, the church and the bridge must have changed even less, although they would have watched with interest the suspension bridge, designed by William Tierney Clark, being built in the 1830’s (the old wooden bridge collapsed into the river in 1828). Ten years later, he designed and built a larger version of the bridge in Budapest, with which Marlow is twinned.
. 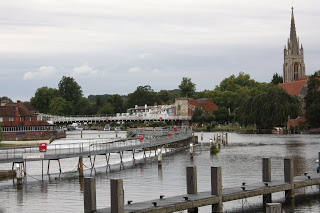 .
This old post box must be one of the very earliest ones made for, even in Victoria’s reign, the design became more elaborate. This one looks ancient but is still in everyday use – the VR stands for Victoria Regina, she reigned from 1837 – 1901 and is our longest reigning monarch. If it is one of the earliest it could date back to 1853, the year that post boxes were first introduced. Incidentally, by tradition, all British post boxes bear the initials in Latin of the reigning monarch at time of manufacture. I wonder how many of my family had posted letters here?
. 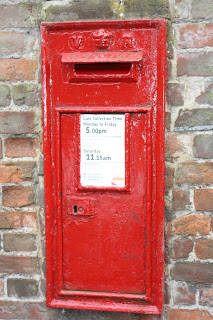 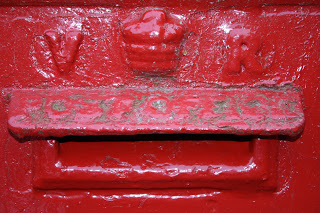 .
I knew, from an old record found on the internet, that Joseph Wright – my great-great grandfather – had been instrumental in building a free church in the town. To my delight, not only did I find the church still thriving, I was able to speak with a senior member of the congregation who, by chance, happened to be there. I was shown a history of the church but there was no mention whatsoever of the Wright family connection, a name not even known to them. Had I got the right place?
. 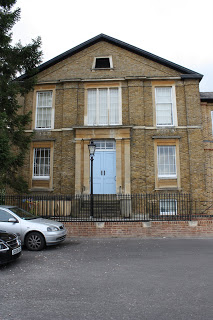 .
Searching through old gravestones, I first came across one with the initials J W and M A D carved in the base. The initials turned out to be for Mary Ann Downing (not for death by insanity!), a name I’d not heard of and, frustratingly, the husband’s name had been damaged and was barely legible – I could just make out the name Joseph. However, it had obviously been a smart grave once for there were the signs that it had been surrounded by iron railings. But why Downing and why J W?
. 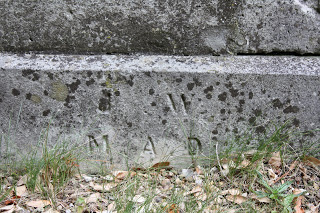 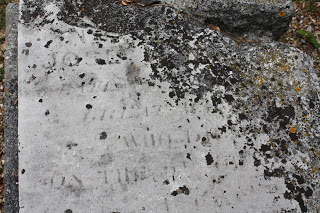 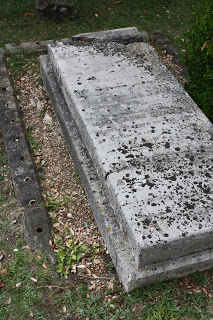 .
Then I came across the grave, below, that looked so recent. To my amazement it wasn’t new at all but over 130 years old. The marble and the railings of such high quality that they showed no sign of wear. Here the names were clear – they were of William, Joseph Wright’s brother and partner in the milling business, and his wife.
. 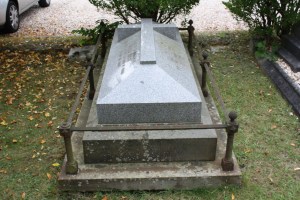 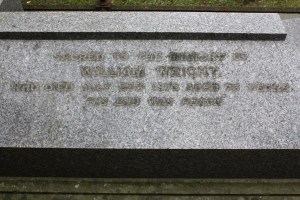 .
Further along was another grave in good condition, although more modest. It was unusal for it was very long and narrow. Almost overlooked in my excitement, this was the grave of Ellen Wright my ‘own’ grandmother’s mother. I had found great-Granny! I knew of Ellen for she had been born in Finland, which had always been something of a mystery. I found that she had been born there because her father was, for a few years, at a paper mill there before returning to the mill at Marlow. Was he learning new techniques or was he there advising?
. 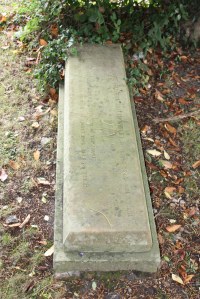 .
The final pieces of the jigsaw came into place when, at home, I found that after Joseph’s death, Mary Ann had remarried (hence the Downing surname). Her widowed husband obviously agreed to her wishes and she was laid to rest with Joseph, her first love.
.
Feeling extraordinarily emotional (strange, really, for I did not know them in the true sense), I reported back my discoveries to the gentleman in the church who was equally delighted to discover that these unknown benefactors were still present within the church they had helped to create.
.
Now all that is left to close the circle of 200 years is for me to attend a service, something I hope to do in the very near future.
.

15 thoughts on “Searching for Granny ….”