Skip to primary content
The lower reaches of the river Otter turn from fresh water to brackish as the river joins the sea. At low tide, mud and salt flats are exposed creating a safe habitat for the hundreds of seabirds and waders that feed, breed or rest on migration there. This area, including its wildlife, I have written about earlier – it can be found by clicking here.
.
This post describes a walk a little further upstream where the river flows through fertile fields of wheat and where cattle and sheep graze in lush riverside meadows.
. 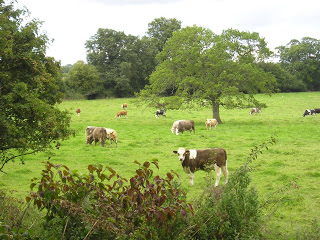 The river – which like our river in the secret valley – is really little more than a stream (or ‘brook’ as we say where I originate from – English dialect is another fascinating subject that I might write about one day!). One moment fast flowing, the next slow, but always crystal clear, the view is one of steep banks and stony bottom. It is here, in the shallower water, that the trout – huge in comparison with our tiny ones at home – sway in the current, waiting for food to be swept down towards them and their ever open mouths. At one place where the river runs across a steeply shelved weir, a salmon run has been built: a series of steps for the salmon to leap to reach the upper levels of the river for spawning after their long migration. Whether they still do, I do not know, for salmon stocks in England are dwindling fast.
. 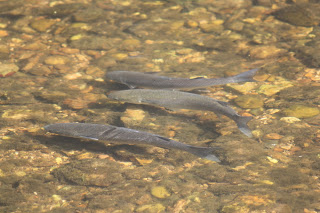 .
Wood and water, just nothing but water and wood, for the crowds of visitors that explore the river close to the beach and form long queues at the ice cream stalls have all been left far behind. Now the sights, sounds and smells are only those of nature on this glorious late summer’s day. The trees are only just beginning to show a hint of the autumn to come but, somehow, their berries have already stamped their mark on the autumn landscape, glowing in and reflecting the sun’s warmth.
. 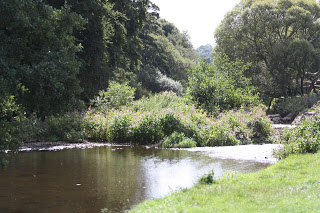 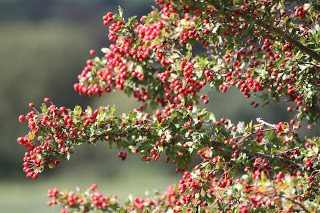 .
Along the river bank, swamping much of the native flora, the Himalayan Balsam is giving a final explosion of colour before the first frosts destroy them for another year. And explosion is the correct description of their bursting seed heads which throw the seed far and wide as they split open. Found in many damp places throughout the country, for its seeds are also dispersed by the movement of the water, the Himalyan Balsam is an unwelcome immigrant to Britain which is virtually impossible to control. A member of the Impatien family, its seedheads are similar to those of our familiar garden Busy Lizzie.
. 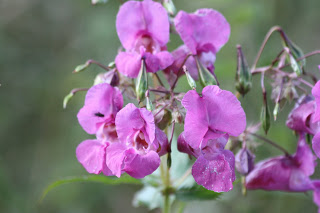 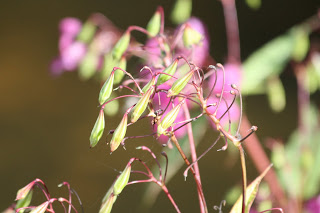 Along the final stretch of our walk, the river is backed by the same red sandstone cliffs that can be seen by the coast. How many millenia did it take for this gentle stream to cut its way through to its present level? My photography skills – or perhaps my patience – did not allow me to get shots of the kingfishers that darted up and down as a flash of azure along this reach of the river. High up in the rock face, their nesting holes (or were they the breeding sites of the sand martins that had already begun their long flight south to winter in Africa?) were more easily photographed. 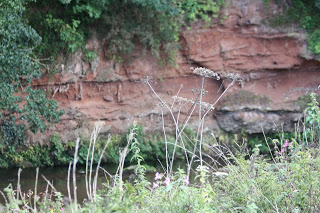 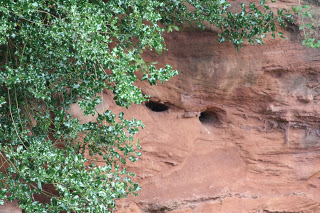 The ten mile walk to the source of the Otter will have to wait for another visit to the West Country. Oh, and I nearly forgot to mention, otters can be found – but rarely seen – along the whole length of the river. 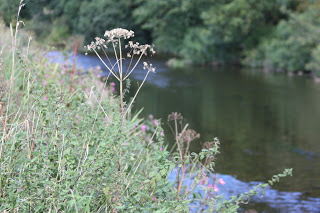 2 thoughts on “A Walk Along the River Otter: Part 2”