I hardly dare mention it but I think Spring is finally coming to the Cotswolds. After I wrote about it back in February, the man from the Met Office sent us cold again. Hard frosts put spring on hold. To be fair, as I also wrote, the Cotswolds may be one of the most beautiful places to live in the south of England but the hills are also one of the coldest. Our spring is always two or three weeks later than places even as close as Oxford or Gloucester.
.

The past few weeks have been unusually dry which has meant that tidying up the garden – or, in my case, gardens: my own as well as clients – has progressed rather well. A nice drop of warm rain now would work a treat and not interfere with time schedules. At last, in the secret valley, leaves are unfurling properly, daffodils are blooming and the lone primrose has been joined by many more as well as purple and white violets.
. 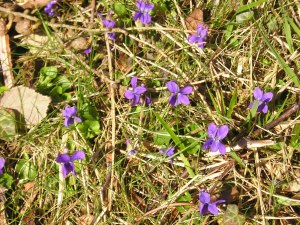 .
Wherever I have lived, there has always been one hawthorn that opens its leaves days before the rest, even when planted as a hedgerow. I’ve often wondered if this is a genetic thing which means, I presume, that it could be cloned to have a whole group of early leafing ones. Or is it a combination of warmth and soil conditions in that particular spot? When I retire and have more time (a contradiction as the two never happen according to friends who are trying it) I will take cuttings and carry out a controlled experiment. It will give me the opportunity to blog about it if I am still able to sit in front of a computer!

.
I wonder if I could get a whole hedge of early flowering hawthorn? It will be another six weeks or more before they will be in bloom in the secret valley.
.
The snowdrops and aconites have now finished flowering. The little ruff of green leaves are all that is left of the latter. They look so similar to the taller herbaceous aconites or Monkhoods whose green ruffs are also poking through the ground now. They are all part of the buttercup family so are related but so unalike one another at their flowering time. I love the tall purple spires of the Monkshoods in mid to late summer: not as delicate as delphiniums, another favourite, but at least slugs don’t eat them and they don’t need staking, a real plus. 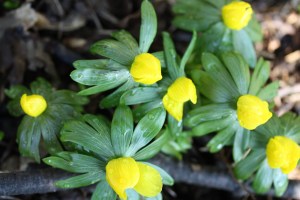 .
Forsythia is in full bloom. These I enjoy in other gardens but never plant them in my own unless the garden is huge and they can be planted a long way off. They show up from quite a distance and when seen too close, are too strident for my taste. The non flowering shrub later in the summer is a coarse affair too, dull and not warranting the space unless livened up by a clematis or other climbing plant. In the photo below it is grown as a wall shrub and it works well in disguising this unattractive garage. Despite being cut hard back to the wall each year in early summer it is always smothered in bloom by March.

The same applies to the common flowering currant. The standard pink is a wishy-washy thing and the deeper coloured, named varieties such as King Edward VIII, is as strong in colour as the forsythia – a plant to be enjoyed in other gardens. For those of you that thought the currants were always pink (although there are white flowered versions) and smelt of cat’s pee – and I include myself in this category for many years – there are three others that are well worth making space for.
.

.
Ribes odoratum, has pale yellow flowers and is beautifully scented. It is a bit of an untidy shrub in my experience, suckering freely but not a nuisance. It grows in happy neglect in a hedgerow – an ideal spot for it to do its own thing – and is really only noticed by the spicy fragrance as you wander past.
.
Ribes lauriflolium is a new plant to me. Unlike the others which all originate from the States, this currant is found in the wild in China. Looking at descriptions on the internet I wonder if they are correct or if there is a lot of variation in the stock, which is possible. I bought mine described as white, evergreen and not too hardy. It has survived -16C this winter, has been deciduous (perhaps it keeps its leaves in milder winters, I rather hope not) and is white flowered. Others are described as yellow and growing to only 1 ft – mine is already 3ft but that may be because it is tucked behind our dry stone wall. The one thing they all agree on and I can confirm is the exquisite scent of lilies of the valley. Do try to grow one if you can find it. 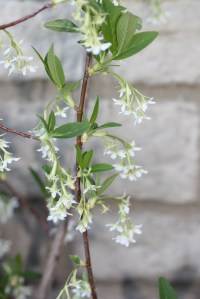 .
I have since discovered that this isn’t a ribes at all! See my next post to reveal all!!
.
My final choice of flowering currant is another favourite, Ribes speciosum. It is reminiscent in bloom of fuchsia and, like them, are pollinated in their native environment by humming birds. Hailing from California, in UK gardens it requires shelter and grows best against a warm wall where it can be trained on wires or left free growing. This photo was taken in the botanical gardens in Dublin on a glorious spring day.
. 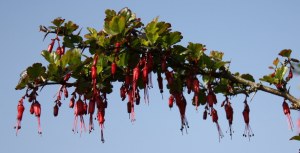 .
Warmth, blue sky and sunshine. The clocks go forward an hour this weekend giving us more evening daylight. I’m almost feeling optimistic about the days to come – something a gardener should never be!
.
.
.
.