Some time ago I was asked if I could plant a hedge.  Straightforward enough, I thought and as it was to be a native hedge, I was especially keen to do it.  Using only native species is always a pleasure for not only are you maintaining a tradition that is centuries old, it is also excellent cover for twentyfirst century birds and animals.

It was only when I went to visit the site that it was mentioned that it would be rather nice if the hedge could be planted on top of a bank, reminiscent of those that are found in the West Country counties of Devon and Cornwall.

West Country banks use large amounts of stone in their construction and were built to protect livestock from the gales and snowstorms that sweep in from the Atlantic.  Over time they become encrusted in lichens and mosses with ferns, primroses and other wild flowers sprouting from every crevice.  They are usually topped with a beech hedge or, sometimes, gorse (or furze, as they call it on Exmoor).

The bank that I had to build was to be similar but faced with turf which would not be as strong. As it was to divide two halves of a garden and (hopefully) not have to keep out determined sheep or cattle, this didn’t matter.  The thing that did matter was that I had to build it in a way that would prevent it from falling down ….. 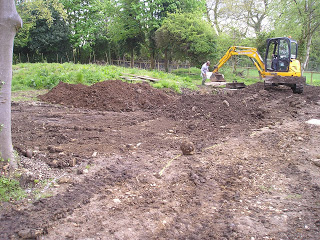 I’ve always found that if you want to create an impression bring in a digger.  There is a morbid fascination in watching a digger at work for the destruction can be immediate and swift.  It certainly would have been if I had been in charge of the controls but, as is so often the case, when you need an expert it is better to bring one in.  I know where I am when it comes to shovels and forks and trowels but it is best not to let me loose with all those knobs and levers.

The ground cleared we were then able to lay out and start building the bank.  We imported the rubble and clod for the base which after being well rammed and compacted could then have a top layer of better quality topsoil spread over the surface.  All was held in place by large mesh chicken wire netting.

Next came the turf and this was laid direct onto the netting and held in place with hazel twig ‘pegs’.  These would gradually rot but not before the turf had grown its roots through the wire.   The netting, too would quite quickly rot (we didn’t use galvanised for we didn’t want it to last for years) and, by then and fingers crossed, the bank would be quite stable and self supporting. 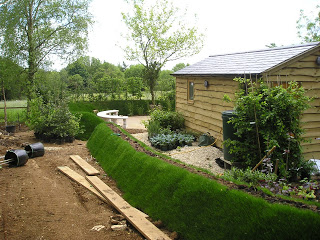 It was with some trepidation when, a few weeks later we cut the top of the turf and the wire out so that we were able to prepare the bank for planting the hedgerow; especially so as we had had some torrential downpours giving me anxious moments about landslips and mudslides.  All, fortunately was well.

Having plants delivered, I find, is always an exciting moment.  It reminds me of when, as a child, I waited for Christmas morning and couldn’t wait any longer to open my presents.  Despite knowing what is coming out of the van, each plant or variety is met with little gasps of delight.   The thrill of knowing that, with luck, they will thrive and continue to grow for many years and may even be there long after I’ve been buried and forgotten is great.

The hedgerow was not the easiest thing to plant but the end result was pleasing.  The final combination was Hawthorn, Field Maple, Wayfaring Tree, Hazel, Dog Rose, Spindle and Hornbeam  with an occasional Honeysuckle to fill the evening air with perfume.  The birds took to it straight away and, in my imagination at least, mice and voles shelter amongst the trunks hiding from mirauding stoats and weasels.  Best of all is the knowledge that, a few years on, the bank is still standing!