When I was a small child I was traumatised by the sound of water, even a dripping tap would trigger nightmares of drowning.  This was not because my life had ever been at risk, although it could be argued that my afterlife was: it was down to baptism by total immersion.  My soul might have been saved by water but it was years before water became something that I would delight in, rather a problem for a lad that was brought up on the banks of the Thames, that great English river that flows sluggishly from its source to London and the North Sea beyond, a distance of 215 miles. 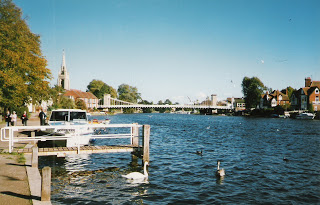 The River Thames at Marlow

It was not until, as a young teenager visiting the West Country, I came across clear, rocky bottomed streams that were so unlike the silty bottomed, muddy waters of the Thames and the smaller brooks back home.  At first the sight and the sound of their fast flow rather unnerved me but there was a swift and dramatic change once I discovered the joys of splashing about, ‘tickling’ for trout and generally getting soaked. Not only could I not get enough of them, I ended up living beside one here in the secret valley.  Our river, to be truthful, is a compromise: it likes to believe it is of world class comparable with the Amazon or the Zambezi as it winds through the landscape in great (or in reality, miniature) curves and sweeps.  Sometimes it is slow moving half hidden by lush foliage that spills over its banks but in other places it is as fast running and noisy as a Devon stream as it gurgle and clinks its way over rock and pebble.

Our little river in the secret valley 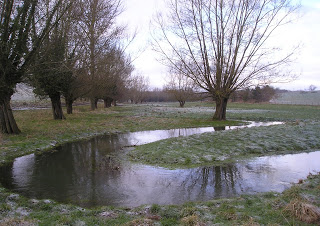 In winter, our river doesn’t look quite so inviting!

Recently I was staying high in the mountains of Snowdonia.  The house that we were in had to its right, a larger river crashing noisily downwards and, to its left, a much smaller gully with an equally fast flow.  ‘Our’ house, which inreality belongs to a friend, is not exactly standing on an island; more it is the solid filling of a watery sandwich. The main river, the term is used loosely for it is even more jumpable over than the one back in the secret valley, tumbles down the mountainside in a series of rocky chasms interspersed with quieter small pools.

One of the nicest aspects of returning to a place time after time is that certain things become so familiar, whether it is buildings or the wider scenery does not matter.  This is good for once you stop looking at the overall picture, the detail becomes more noticeable and things that would be overlooked if you only ever visited once begin to stand out.  Here there is little in the way of buildings, apart from the numerous ruins that stand as ghosts to a time when the hills were more densely populated with miners and farm workers.  On my morning walk and musing on how terrified I had once been by the sound of water, I began to notice the change in pitch and volume which alters constantly as you pass by.  Where the water falls several feet, not surprisingly the noise is at its greatest but, even there, it can be a deep sound or a lighter one, depending on the rate of flow and whether it lands on rock, water or pebble. 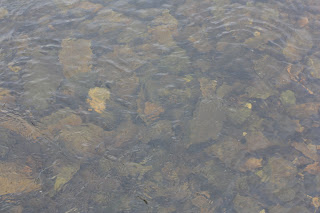 Then there are the waterslides: these can be steep or barely inclined, narrow or wide, fast or slow flowing.  Whichever they are, for me they are the most visually exciting of all with their water moving effortlessly, literally sliding along the surface and their ‘shushing’ sound building up to a more dramatic crescendo as the rock bed alters in character once more.

A massive waterslide on Exmoor …..

….. and a smaller one in Snowdonia

And then, of course, there is the sound that once traumatised me but that I now find the most fascinating of all, perhaps because they entice you to explore: they draw you further into their world, often a secret one.  The sound of dripping.  Sometimes it is obvious where it is coming from and where it is landing but often it is a sound that demands you to seek it out and then, not infrequently, only one half of the equation can be solved, if you can find the source you cannot find the landing place or vice versa. 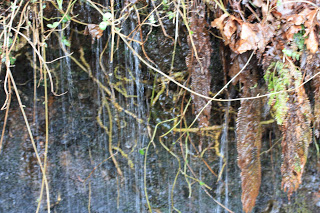 Higher up the mountain is an old disused slate mine, long abandoned and with its shaft open for all to explore. Little natural light enters the low tunnel entrance and unable to see far inside there is only the sound of water seeping through the roof landing in the shallow water that collects in the passage below.  Here the sounds are as varied as those of a xylophone, the music made being both enchanting and unnerving; it is both welcoming and threatening at the same time. 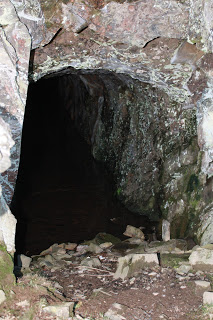 Not a place for the faint-hearted!

I may have got over my old phobia of scary water sounds but, I have to admit there is still one place that makes me shudder.  Just up the track beyond the mine there is a patch of grass and moss that has to be crossed and here, if you pause, you can hear the sound of fast moving water and the crash of a waterfall but there are none in sight.  The sound comes from below ground under your feet – childhood anxieties rise if I loiter here and as I continue my walk I notice, with wry amusement, that it is at an increased pace.

7 thoughts on “The Constant Drip”