.
It has been difficult to remember, sometimes, that it is still only spring time. After the unusually early, bitter and snowy winter weather we experienced, 2011 came in cold but dry. It remained so until the end of March when, wham!, summer arrived.
.

With temperatures soaring into the mid 80’s, many plants struggled to open their buds (and the ash trees still haven’t done so properly). I had planned to write about this battle but became – as you may well know – rather obsessed with puppies ….
. 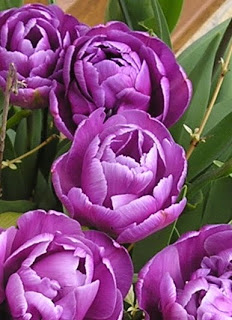 .
However, many plants did rather better than normal. Tulips, especially the fragile doubles, were better than ever with no rain to spoil their petals, as have been the paeonies. Perfume has wafted about the garden in the warm evening air – can there be anything more lovely on both eyes and nose than this paeony and wisteria combination?
. 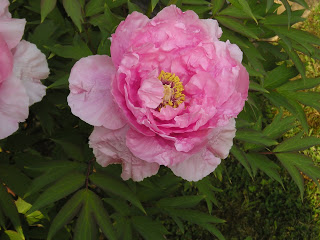 .
The trees, later than has been usual for many years, finally started to come into leaf. Now the countryside is awash with May, cherry and Horse Chestnut blossom. It is all quite stunning. Or was.
.

.
Out of nowhere, on Monday night, we had frost. The first for over five weeks, this was no slight touch of cold but one that turned the secret valley into a white valley of death. Well, I admit, that is rather an exaggeration but, I imagine it is due to the very hot temperatures immediately before, some plants – and especially the trees – have been decimated. One moment their new leaves hurt the eyes with their iradescent green, the next they are brown and shrivelled. Some, depending on how the cold air lay, have come through unscathed whilst their neighbour has been hit badly. Will they recover? I expect so but, possibly, too late to help the insects and birds that rely on the food source at this very moment. Time will tell.
. 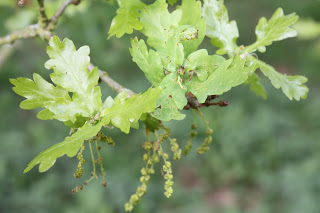 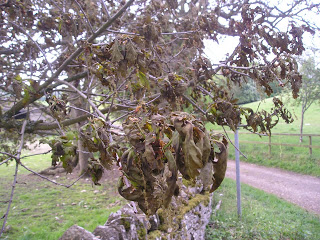 .
Just when our feelings were at their most depressed, the weather gave us another surprise. Rain. The first for many weeks, we have been desperate for it. The ground has been cracking, the river getting low, plants wilting and, worst of all, the farm crops not growing. In places, the young corn has started to go yellow. And when we least expected to get any, we awoke to the sound of rain on the windows. Our only neighbour, the farmer whose corn was suffering, and I were standing in the field below our homes, getting soaked and almost hugging each other with joy. It gave me just the slightest awareness of how people in countries that really suffer from prolonged droughts must feel. And it also made me aware of this rather primitive reaction of wanting to literally dance in the rain when it first arrives.
.

The old mortar in the garden is beginning to fill once again!
.
The paeonies have been ‘knocked for six’ but, who cares? Apparantly, we have only had 1.5mm of rain during March and April compared with the 40-50mm in an average year. Let it rain for days now to restore the balance. But – as a gardener speaking – please only at night and only fall gently……
.