For gardeners, peat is a well-known, although less used than before, mainstay of seed and potting composts.  It’s ability to absorb large quantities of moisture and to retain nutrients plus being very light when dry, thereby reducing transportation costs, made it the perfect growing medium.  In recent times, the environmental impact of industrial scale peat extraction has given rise to concern leading to the development of alternative composts becoming available.

In the areas where peat is found – mostly in the temperate regions of the northern hemisphere – it was also a common fuel source and is still used for this purpose today.  On a non-commercial scale peat for burning is also in decline as the hand digging of the bogs, the drying out process and the carting all takes time for very little financial gain.  The days of the ‘turf cutter’ being paid sixpence a load have long passed.

On Exmoor, in England’s West Country, peat is always referred to as ‘turf’, a dialect word, that means something very different from the velvety, green sward of gardeners.  Turf was still being cut there into the 1970’s and was one of the very first tasks I was given when arriving as a lad to work on a remote hill farm.  It was back breaking labour turning the individually cut pieces over and over to allow the wind to dry them before stacking them in heaps which later would be carried back to the farm to supply the fires that were needed all year for both heating and cooking.

Despite the backache, it was an enjoyable time being up on the moors all day with just the sound of the wind and the curlews mournful cry for company.  The native Exmoor ponies and the wild Red Deer all would appear from time to time for you became part of the moorland scenery too. Returning to the farm tired after a hard day’s work to be greeted by the sweetly fragrant smoke from the turf fires within was reassurance enough that it was all worthwhile. 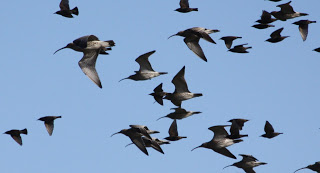 Curlew and Red Deer on Exmoor

Last summer a visit to Connemara, on the west coast of Ireland, brought back all these memories for there turf burning is still commonplace.  There were the rows of turf lying on the ground waiting to be wind-dried, there were the stacks of turf waiting to be carted.  And, best of all, there was the heady smell of dozens of peat fires wafting over the landscape.

Recently, on Exmoor, it has been realised that turf cutting kept the bogs ‘open’ providing a valuable wildlife resource and although not reinstating the practice the National Park has instigated the Exmoor Mire Restoration Project. This has involved blocking old drainage systems and re-wetting over 300 hectares; the project is on-going.  Visit there website by clicking here to find out more.

Exmoor is still as beautiful as ever and my love for it never diminishes but, without the scent of the turf fires, there is that little ‘something’ missing.  However hope may be around the corner: the entrepreneurial Irish are selling peat incense blocks by mail order so that you can have the scent anywhere.  I may even take a few blocks and light them on Exmoor for old times’ sake.