A few weeks ago I blogged about cutting peat – or ‘turf’ as it is known on Exmoor – for burning.  It is an ancient tradition, now past.  You can read that post by clicking on the link here.

When I first visited Exmoor forty-five years ago one of the first tasks I was given was to ‘turn’ the turf, literally just turning it over and over so that the wind dried it.  In many ways it was a boring and monotonous job but it had to be done for it was the provider of heat for the farm, both water and cooking.  Being alone, high up on the moors, was never lonely for the isolation, even for a lad, was awe-inspiring.  I loved it.

Recently, I was flicking through the pages of a book that has been in our possession for as long as I can remember and came across a photograph of an Exmoor turf cutter.  I’d never noticed it before.  The book is called ‘People of all Nations’ and was written about 1920.  The photographs are wonderful and show a way of life long gone. 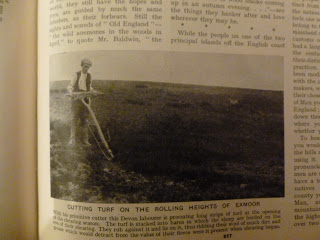 With the benefit of hindsight, it is a pity that I took so few photos of my early days on Exmoor.  At the time, it seemed that the unchanged life of the moors would go on for ever.  Little did I realise that I was witnessing its passing and  I feel very privileged to have been a (very tiny) part of it.  What has endured has been its influence: my arrival quite by chance on Exmoor and being taken into its heart has been a subject of discussion recently with Phil Gayle on BBC Oxford.

The caption below the photograph reads:

Cutting Turf on the Rolling Heights of Exmoor. With his primitive cutter this Devon labourer is procuring long strips of turf at the opening of the shearing season.  The turf is stacked into barns in which the sheep are herded on the eve of shearing.  They rub against it and lie on it, thus ridding their wool of much dirt and grease which would detract from the value of their fleece were it present when shearing began.

2 thoughts on “Turf Cutting on Exmoor”