There is a general consensus that Ragwort (Senecio jacobea) is a noxious weed that is invading the British countryside, poisoning livestock and possibly humans alike.  Numerous articles, including some official ones, refer to it being ‘recently introduced’, ‘out of control’ or ‘increasing dramatically’.  Other sources suggest that just breathing in the plant ‘spores’* is enough to cause serious liver damage. 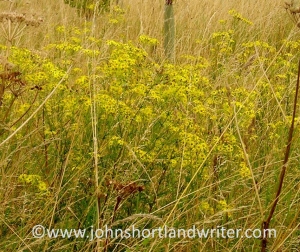 There is no doubt that in places ragwort is increasing just as other plants increase in number or range periodically.  There is also no doubt that it is a highly toxic plant that is capable of causing fatalities in livestock, particularly cattle and horses.  Less frequently reported are the benefits to the environment it brings for it a native plant that is host to numerous insects as well as Common Broomrape (Orobanche minor), an obligate parasitic plant that cannot complete its life cycle without it (although it is also parasitic on some other plant species too).

Plantlife, the conservation charity (link here), have produced a ‘position statement’ on ragwort control which – in my opinion at least – appears to be more balanced.  They acknowledge that livestock can be damaged and that control may be necessary in areas of high risk.  They also counterbalance the argument by stating that there is no evidence that it is proliferating.

Ladies Bedstraw – sometimes confused with ragwort should not be disturbed

The alkaloids in ragwort are harmless whilst they remain in the plant but become toxic once ingested.  It takes considerable amounts to cause catastrophic liver failure and this is usually caused by feeding contaminated hay over long periods of time.  To have a horse die from ragwort poisoning is extremely distressing both for the horse and its owner and as symptoms don’t show until cure is too late precautions do need to be taken.  Reaction caused by casual contact is usually dermatitis, and relatively rare.

Ragwort and horses – not a good combination

Ragwort is more prevalent where disturbed soil conditions exist and the churning of ground by hooves create perfect conditions for seed to germinate. Although animals don’t select fresh ragwort in preference to other species they will eat it if other food is scarce such as in times of drought or through overstocking.

Ragwort growing beside path made by horses

So should ragwort be controlled or not?  The answer, as with most things in life, is yes but in moderation. It is quite unnecessary to remove ragwort plants from areas of low or no risk as is sometimes thought. I keep horses and spend time each year removing ragwort from the fields in which they graze. The best way is to pull the plant out by hand rather than to use chemicals which create other issues. It is generally believed that the toxins can be absorbed through the skin so it is advisable to wear gloves to prevent this.

Always remove the pulled plants from the field

The tall flowering stems of ragwort with their attractive head of yellow daisy-like flowers are easy enough to see and remove. Less obvious are the non-flowering plants – these have a rosette of leaves hugging the ground. It is essential that the pulled plants are disposed of carefully, preferably by burning, as seeds can form on dying plants. It is also essential that the plants are identified properly and that other species are not removed. It should also be remembered that it is illegal to disturb or remove any wild plant that is not growing on land you own or have responsibility for. 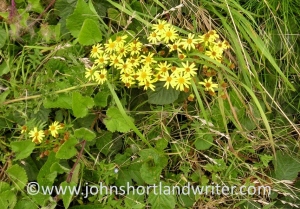 *Ragwort is a seeding plant and does not produce spores. This is just one way how misinformation can cause confusion and unnecessary health concerns