What is it in human nature that always makes us long for the exact opposite of what we are getting at that moment?  I wouldn’t go so far as to say that I’m constantly wishing for something different for I’m pretty easy-going – well I think so, anyway 😊   But over the last few days I’ve heard myself saying “if only…” a lot more often than is usual.

Until Brexit changed our outlook somewhat, as a nation we were brought up to believe that talking politics (or religion) was taboo, it wasn’t something to discuss even amongst close friends or family. It was always said that the reason for not doing so was to avoid offending anyone.  I think that may just have been an assumption and that the real reason for not talking about these things is because we Brits are always taking about the weather.  There’s no time left to discuss anything else. One of the certainties in an uncertain world is that in the UK the weather will never be the same two days running.  Now even that certainty has been take away from us for we have been suffering from high temperatures and prolonged drought.

I have extended family scattered all over the world and as a child lived in a house where foreign accents and languages were frequently heard for not all of our visitors spoke English.  One of the phrases that was a constant, for we lived in the countryside, was how green our landscape was.  Those that came from more tropical climes couldn’t believe how cool our summers were either.  This year they would feel more at home for our fields and woods are tinder dry and our grass parched and brown.  It is for this reason that I have been saying “if only…”   As a relief from the arid conditions, I have decided to write about cooler, wetter times not because I really want it to snow in August but so that we had some images to look at to remind us that, unlike many other places, our drought and oppressive heat is unlikely to last very long in comparison.  If it helps to make me feel slightly less grumpy about our present state, then so much the better.

“If only it was colder” – to wake up at the break of day to cloudless skies and sunshine is, to put it frankly, un-British.  There’s nothing worse than to lie in bed overheating only to find no relief when you get up.  Give me a crisp, frosty morning any day, when the sky is blue, the air cold and our little river shimmering, not in a heat-haze but a cold-haze.  Of course, in reality, our winters aren’t like that very often.  Far too often the days are grey and gloomy but I’m highly unlikely to say “if only…” about one of those.

“If only it would snow” – I love the white stuff even though it does make life more difficult.  Whether the drifts are across the road or not, we have to be out in it to attend to our horses for they need feeding and watering whatever the weather.  Snow in southern England is a very hit or miss affair and we have had none for the last few years.  Only once in the past twenty years of living in the secret valley have I had snow deep enough to ski on and it is a great source of pride and pleasure that I managed it even once.  There is nothing like clipping on a pair of skis and swishing through a landscape that has been silenced by snow.  The photos below were taken some years ago – just looking at them makes me feel pleasantly cool.

“If only it would rain” – these words are almost never spoken in this island nation for rain is constantly being blown inland on a south-westerly from off the Atlantic Ocean.  However, at the moment, it is rain we need more than anything.  Our garden plants are shrivelling, the winter corn cannot be sown for the ground is rock hard.  And as inferred to earlier, we miss our green grass, our wildflowers and the verdancy of our woodlands.  The last couple of days the forecasters have been telling us that rain is on its way and that it will be torrential when it arrives.  So far, we have had three light showers lasting just a couple of minutes.  What we need is two weeks or more of gentle, refreshing rain.  Whether we get it we shall have to wait and see.  Our valley looks rather splendid when it is flood but I don’t really think we should wish for that.

There is one more “if only…” that I know I shall be saying before long and that is “if only it would go back to that lovely summer weather we were having.”  Some people are just never satisfied!

When Irving Berlin wrote the now immortal lines, “I’m dreaming of a white Christmas, just like the ones we used to know” he was pining for colder weather for he was staying in California (or Arizona, for both states lay claim to the fact). The original version of the song actually began with a complaint about warmer climes: “The sun is shining, the grass is green, the orange and palm trees sway…”  How, as a child I could relate to that – well almost.

My childhood home was not in the Cotswold Hills but at the foot of the Chiltern Hills, along the banks of the River Thames which thirty or so odd miles downstream flows through London on its way to the sea. The microclimate of the river meant our village had a much milder climate than the higher villages just a few miles away. Although nowhere near warm enough for oranges and palms to survive we very rarely had any snow at all. The village wasn’t renowned (or so it seemed as a child) for its sunshine either and the grass remained obstinately green all year round. Searching through old photos, I can only find one where our garden had turned wintry white and that was only a heavy frost. The winter of 1963 where we had to push a car through a small snowdrift was such a rare event that it is still talked about some 56 years later. 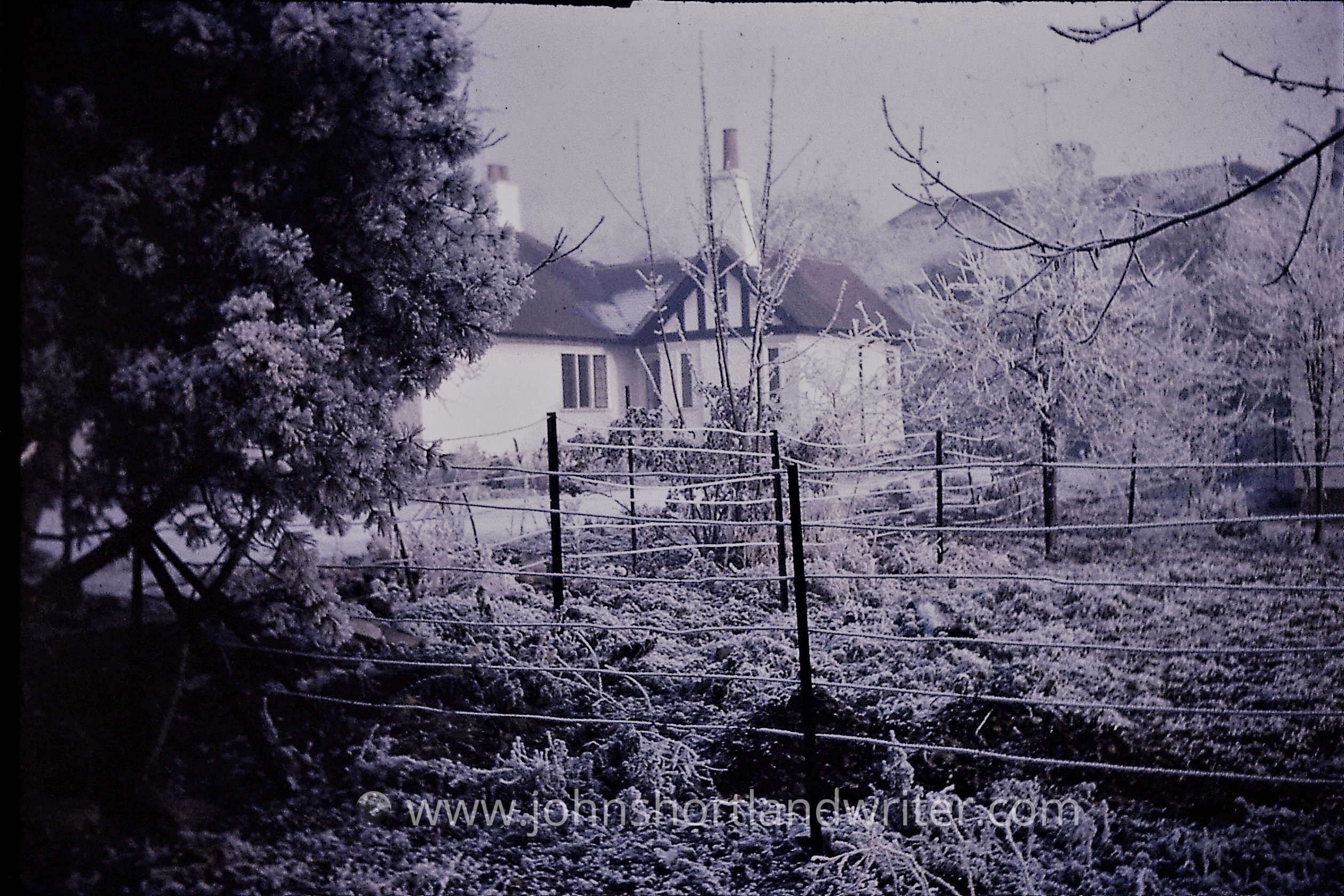 When the time came to leave home and buy my own house, I moved to the far side of the Chilterns where snow was more common. Within a couple of months of my arrival, I had to learn to master wintry driving conditions that a Canadian or American driver would barely think twice about. For in the UK an inch or two of snow causes major panic, road closures and travel disruption. 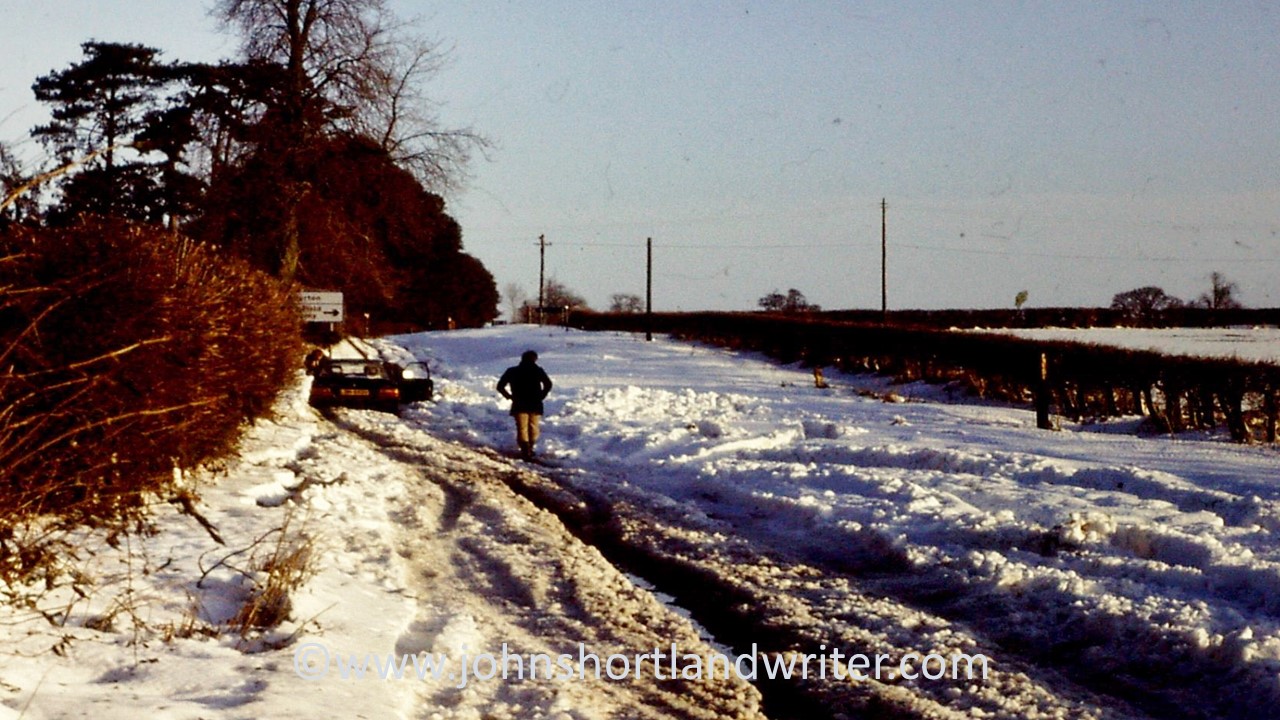 Fast forward to 2001 and my move to the Cotswolds. Until then, I had to go for my snowy ‘fix’ overseas to Norway, Switzerland, Austria or Canada. Never a great sportsman it seemed rather bizarre that I had hit upon a sport – Langlaufen or cross-country skiing – that not only did I love and turned out to be rather good at but one that I couldn’t practice easily in my home country. However, the Cotswolds are far snowier than anywhere else I have resided and in 2010 I actually manged to ‘live the dream’ by skiing from the back door of my home and along the secret valley. 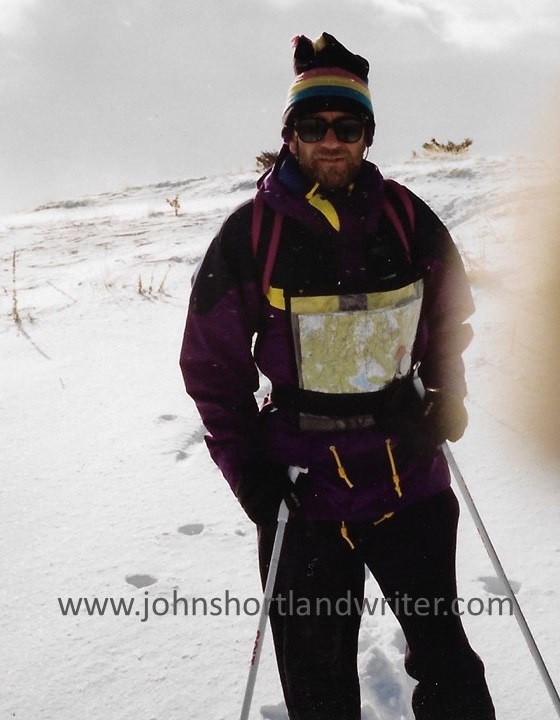 Living the dream in Norway 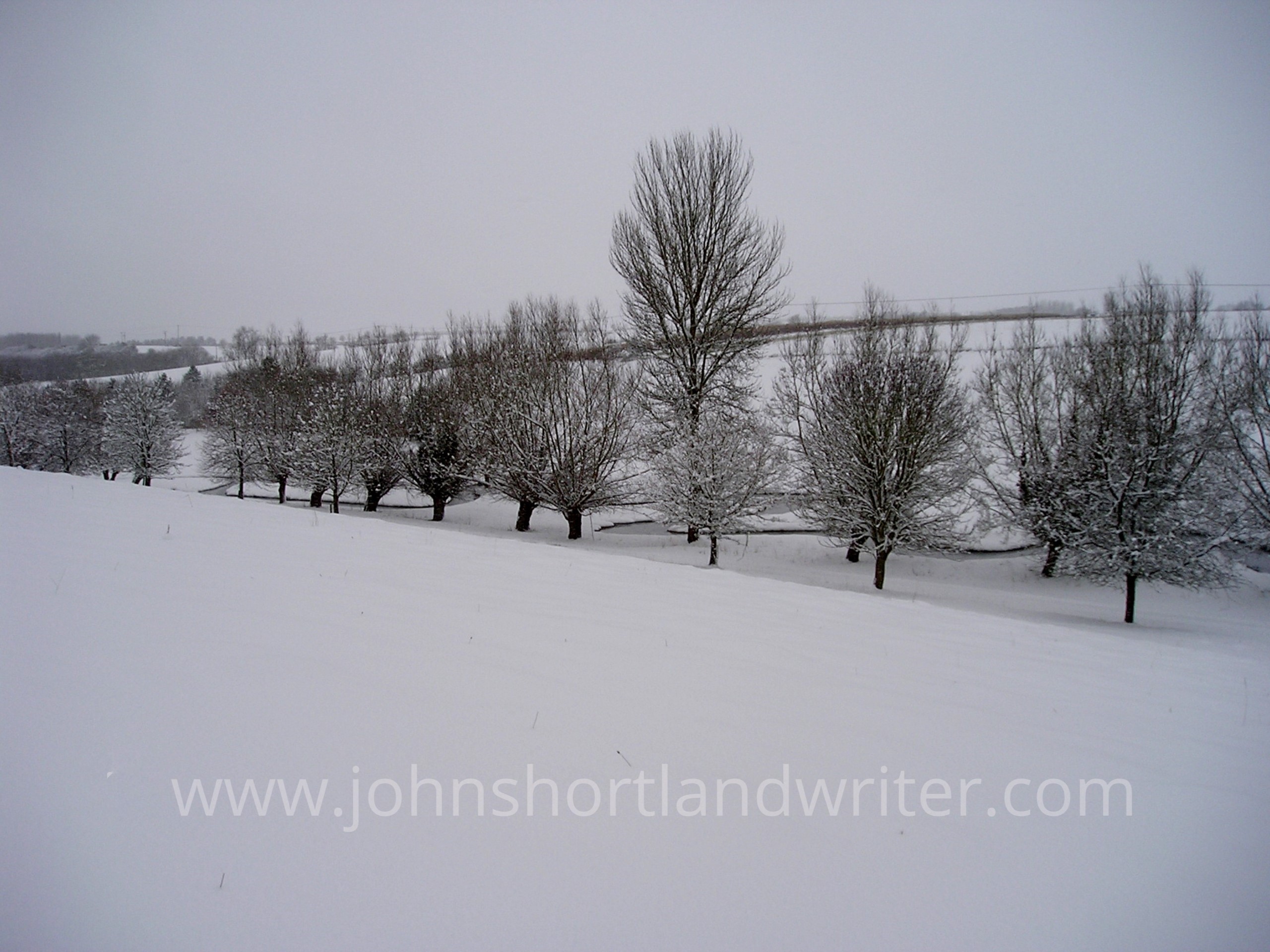 Snow in the secret valley

So why am I, like poor old Bing Crosby, singing that same old dirge? Is it because snow here rarely falls before Christmas and quite often doesn’t fall at all? The only white Christmas I have photographic record of (and I can’t remember any other) is of 2017 and even then, by Christmas Day nearly all of it had melted.

Just occasionally, the snow does finally fall deep and crisp and even. When it does, much of Britain hibernates, nervous of venturing out. However, we still have horses and other animals to feed and tend to. And when I’m out in the four-wheel drive I feel rather satisfied that I have mastered the elements, satisfied in a smug way that only the English would understand for those used to snowier climes would wonder what all the fuss is about. 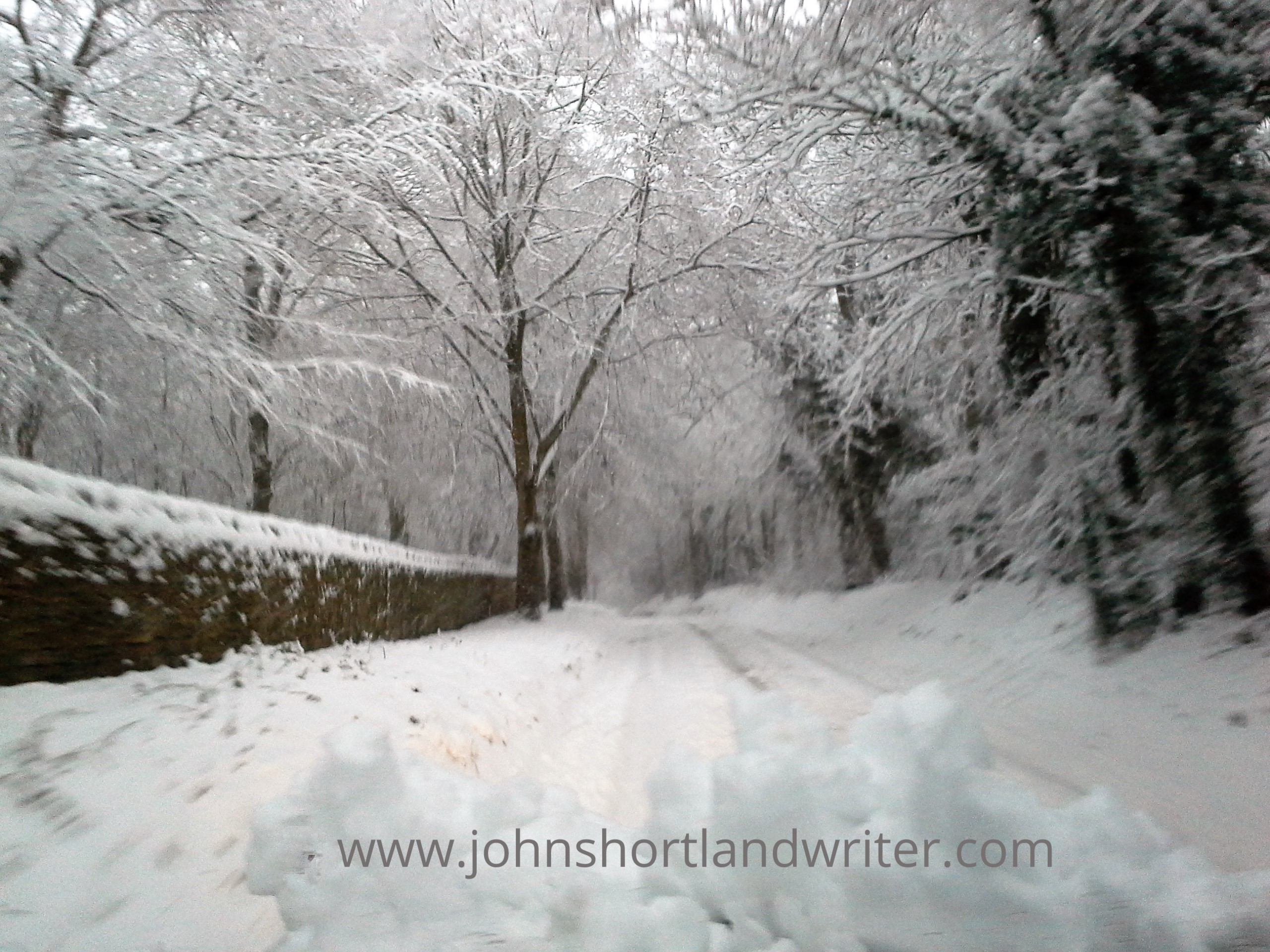 Driving to the horses

Christmas 2019 is proving to be mild and green yet again. It has been a bizarre year weather-wise for we have had the wettest autumn on record and the fields surrounding our cottage are under water once again where the little winding river has burst its banks. In Australia, bush fires are burning out-of-control under fierce, all-stifling temperatures. Friends in America have already had to cope with exceptional winter weather. Perhaps I should, rather than have a little moan about the lack of a white Christmas, be thankful that I live in a country where extremes of weather are unheard of.  On the other hand (and trying not to sound to whiny), it would be nice if we could have… 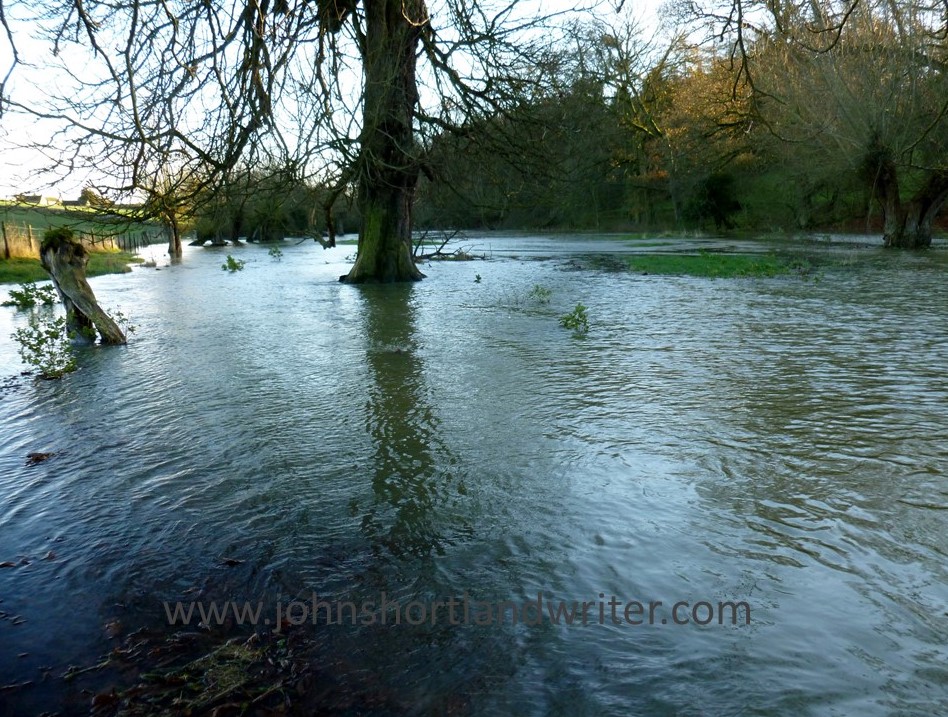 Floods rather than snow for us this year 😦

Wishing you all a very peaceful, safe and happy Christmas – and may the weather be kind to you.  John.