Skip to primary content
Skip to secondary content
The west coast of Ireland is renowned for its beauty for the crashing waves of the Atlantic Ocean, with nothing to slow them down from the shores of America, have created inlets and pools, islands and crumbling rock face.  It is a wild place with mile after empty mile of high cliffs, sandy coves and sheltered bays.  Like the shadows that play on the surface of the water, the weather is forever changing as rain and sun alternate produce the contrast of lush green against granite outcrops.  All along this coast there are ruins of the old crofts, now long deserted as the population left to find work and comfort elsewhere.  Those that remained moved into more modern homes that look as if they have been dropped into the landscape for they sit at all angles, some looking out to sea, some with their backs firmly set to it as if hunkered down waiting for the next battering storm.
One of the most picturesque towns on the coast is Clifden in Connemara whose population swells threefold during the busy summer months to 6000 or so.  The region described as Connemara is undefined, being part of County Galway, but is generally accepted to be the remote, westernmost area, where mountain, bog and sea all jostle for space and attention.  This remoteness has helped to save the Irish lannguage and Connemara has the highest percentage of Gaelic speakers in Ireland.﻿ 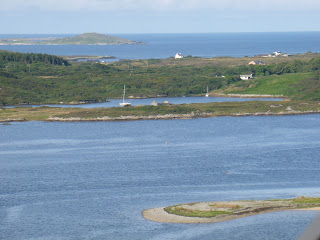 We – my partner, myself and some friends – had come to stay high on the cliffs outside Clifden specifically to visit the annual Connemara Pony Show, where the native ponies are put through their paces over three days.  I have written of this in my last post (click here) and also mentioned how we came expecting rain and cool temperatures only to be blessed with such hot weather that we actually swam in the sea.   The fine weather meant that we were treated to some spectacular sunsets.
There are two roads that lead west out of Clifden, the Beach road and the Sky road.  The first only goes a short distance but the Sky Road is an 11km loop that is a popular destination for both tourist and local alike on a clear evening. 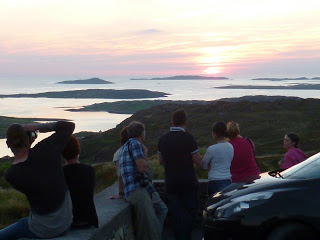 ﻿
As the light begins to fade there is little to prepare you for the spectacle that will come later.  A greying of the sky with just the merest hint of colour as if an artist has slashed the palest of pink washes in a quick ‘Z’ shaped stroke.
﻿ 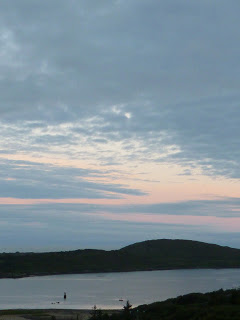 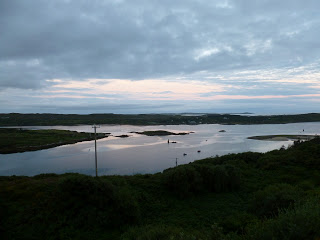 As the sky darkens further it would appear that the sunsets we have been promised will not materialise.  The sea changes in appearance at this point and becomes almost glassy or mirror like.  The dark line stretching across the water in the photo below is made by fishing nets stretched across the bay, invisible at any other time of day.  Trees, too, standing on the edge of the water cast their reflection in the stillness. 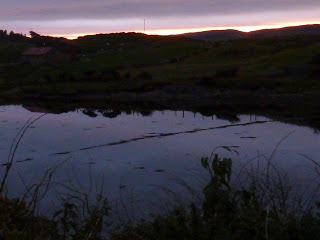 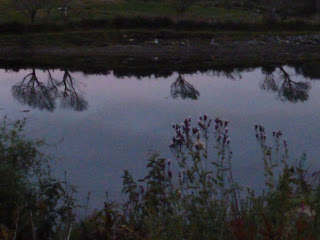 A shaft of light suddenly appears along the horizon, lightening up the landscape once again only to be hidden by a bank of seafog rolling in, determined to spoil our evening display, leaving just a hint of gold cloud rising above it.  But, just as quickly it disappears again to reveal the sun disappearing over the horizon beyond the islands. 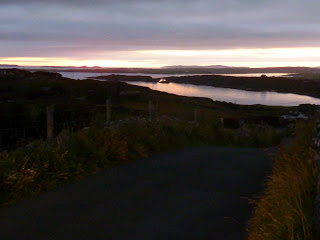 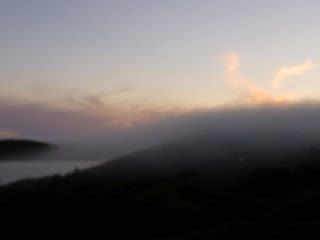 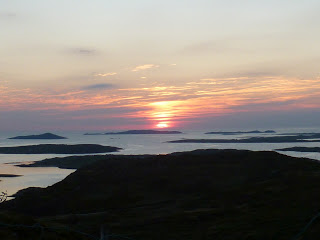 We stay until the sun disappears completely and drive on imagining that the show is over  but nothing has prepared us for this last finale seen as the road rounds a bend.  The combination of cloud, light and darkness, of navy blue, black and pink, mirror imaged in the still water is quite breath taking.  It seems unreal, as if it should be the backdrop to a Wagnerian opera; we stand on the sand speechless for no words are adequate. 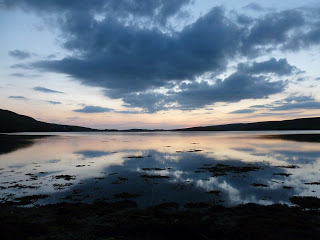 I had to share the sunset with others but waking early the next morning I stepped outside to be greeted by an almost equally spectacular dawn.  And what phenomenon created this vertical shaft of colour coming straight up from the sea?
﻿ 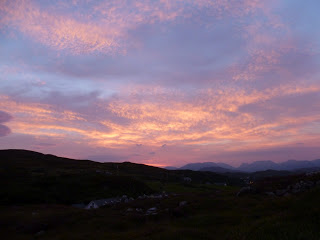 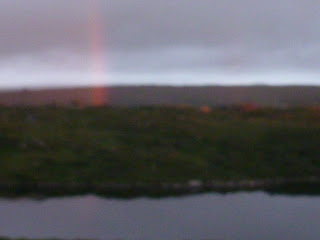