It is a very long time since I went for a ride on a Big Wheel.  I was twelve when I bravely called an older cousin a coward because he wasn’t too keen on the idea.  Once aboard, we slowly climbed to the top and as soon as we reached it he had he rocked it violently backwards and forwards until I’d begged forgiveness.  Now almost fifty years later, I was determined that I would go for my second trip but on my own so there would be no witness to my fear – but first I was due at a meeting.  Meeting ended and bolstered by a visit to the pub for a pint or two of beer, I ventured forth only to be thwarted: the fair had closed for the night.

Chipping Norton, here in the Cotswolds, comes to a standstill for three days every September when the fair comes to town.  Dating back to statutes in medieval times, the annual ‘mop’ or hiring fair was originally the time when agricultural and other workers would be hired for the forthcoming year.  In time, they became social events too and, nowadays, they are just a good excuse for enjoyment.  The rights of the fair to be held annually are carefully safeguarded and despite considerable inconvenience to traffic, the centre of the town is blocked by numerous stalls and rides. 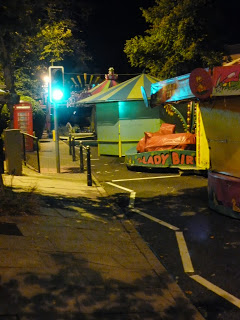 Funfairs are noisy, active places.  There are flashing lights, music and the screams and shouts coming from the fair-goers, people of all ages reduced to childish delight by all that is happening around them.  But then it closes for the night and what happens then?

Oddly enough, once the fairground has closed the town centre becomes deserted.  Perhaps all the excitement and exhilaration has been too tiring but quite suddenly, there is silence and no-one to be seen or heard.  This is what I found when I wandered through the fair this late night.  It was a strange, surreal experience – almost as if the world had ceased to exist – and the more I looked at the dodgems and rides, stationary and empty, the more a feeling of unease came over me.  Even the helta skelta took on a threatening appearance.  Was I really alone here?  Would a person confront me from the shadows and, if they did, what then?  Telling myself I’d been watching too many horror movies I quickened my step and walked around a corner to come face to face with the only other ‘human’ in the place.

Turning sharply away the sight of Star Slush, the only sign lit up, brought back the pleasure to be found in the artistry of fairgrounds too.  Travelling people  of all types, whether fairground, Romany or bargemen have a highly developed form of decoration, all closely connected and worthy of further contemplation.  But not then – time for home with the vow to return next year for my ride on the Big Wheel.

Back at the Secret Valley, where the only light was that of the moon, there is never a feeling of unease and, the night being warm, I decided to walk down the lane to the river.  As I did so, I mused on why I felt so uncomfortable being alone in the town centre.  Many visitors comment on how silent and brooding the valley is at night with no street lights, houses or familiar sounds.  It is all about belonging: I have lived ‘in the middle of nowhere’ all my life, it is where I belong and the silence and darkness here is my comfort blanket.  I’m obviously not yet ready to become a city boy. 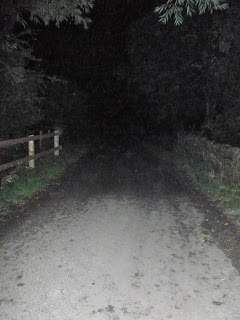