Butterflies are the most extraordinary creatures – so delicate to look at, yet they must be as tough as old boots to cope with the rigours of an English summer. For weeks now they have had to endure cool days and heavy rain but, with every burst of sunshine, out they come. And this year there seem to be more than ever.

And it’s offical: it started in Spring when the BBC reported (so it must be true!) that clouds of Painted Ladies had been seen off the English coast, soon to arrive from annual migration from Africa. And sure enough, just a few days later, the hedgerows of the secret valley suddenly had dozens of them resting on the fresh new leaves and, every so often, stretching their wings to absorb what warmth there was.

Then just as suddenly they were gone! They had laid their eggs and, I assume died, their purpose in life over. Now they are back, or if I’m correct, their offspring are, feeding on the late summer nectar of the wild flowers and, in the garden, on the lavender and buddleia bushes.

The Peacocks, too, are plentiful but these we see all year round, for in the winter they come into the cottage and hibernate in between the folds of the curtains or some other dark place. Periodically, when the log burner is set on high and the house warms up, they fly around before settling down again for another long sleep. The one below is feeding in the garden on Phlox ‘Hesperis’, so called because of its similarity to the Dame’s Violet – and just as beautifully fragrant.

It is the smaller butterflies that I especially like, the subdued markings of the Speckled Wood have the loveliest ‘eye spots’ on their wings, the colour of Devonshire clotted cream. The Gatekeeper is a much livelier and brighter coloured one, the one in the photo conveniently stopped for a moment on a wild scabious. 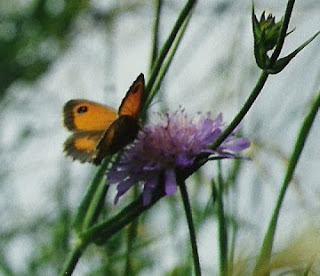 The ‘blues’ are the trickiest to identify. The two photographs below are of the Small Blue (I think), the female not looking very blue at all! 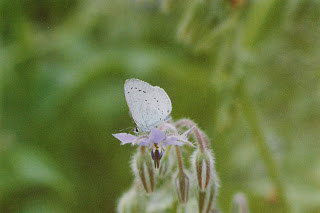 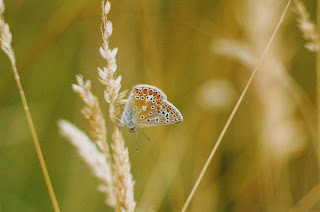 And soon all will be gone! Some migrating back to Africa or hibernating in a log pile or other sheltered place but the majority dying with the frosts,their species overwintering as pupa below the leaf litter to emerge as adults in the spring – which is, perhaps, the biggest test of ‘as tough as old boots’ of them all.