This year is proving to be one of extremes. Weather wise, first it was snow, then late frosts, then rain, more recently drought and scorching temperatures. And it also seemed to be a similar situation with wildlife. The tree blossom and wild flowers have been amazing with every month some new blooms outrivalling those of the previous month’s.
. 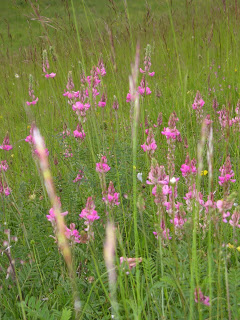 .
Now it seems July is to be the month of wasps. There are hundreds in the garden, indeed probably thousands, and they are everywhere. And if that isn’t bad enough, the very hot weather we’ve been having seems to have made them far more aggressive. Normally they do not prove to be troublesome until the fruit ripens in late summer, this year it’s different. And I’ve already been stung once this week which is very bad news for me – I suffer from a severe reaction, although never yet been hospitalised, fortunately. I keep my drugs and sprays with me – and a mobile phone, in case help is needed – and also keep my fingers tightly crossed. This, like the recent advice from a doctor to stay indoors, is not too much help for someone who earns their living by gardening.
.

.
Fifteen wasp nests in four days has surely got to be a record and so I have been keeping the pest control man busy. It’s a pity to destroy them but better I get them first than the other way round! I remind myself that during the spring they live on aphids and the like and are, therefore, valuable pest controllers themselves. Then I remind myself of the pain, discomfort and swelling, and sometimes injections I get, and they have to go.
.

.
I commended myself on my bravery, taking these photos, as the wasps went into the attack as the chemical jet entered their nest. But such is my devotion to get a new post out – I’m becoing a true blogger news hound!

My heightend awareness of wasps this week made me also notice these holes in a deserted timber garage. They were the homes of a small colony of wood wasps. Unlike the common wasp which live communally in their hundreds (the largest of our nests turned out to be the size of a football), wood wasps are more solitary, each one occupying their own chamber. 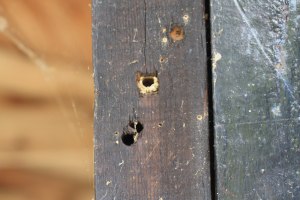 They are quite placid compared to their aggressive cousins and, I believe, unable to sting a human being. The largest ones look terrifying but this species was small, about half the size of the common wasp. There are about 500 species of solitary wasp in Britain and I can’t identify any of them. I felt totally at ease photographing them inches away and they completely ignored me. Perhaps word had got round what I did to them further down the secret valley!
. 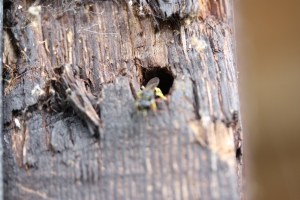 I’m now looking forward to the first frosts and a wasp free winter!