Although in the UK the yew tree (Taxus baccata) is often called English Yew it is, in fact, very widespread in its distribution growing throughout Europe as well as parts of Africa, Iran and Asia. It can live to a great age and there are several, mostly growing in churchyards, that are thought to be a thousand or more years old. One such tree grows in the Chiltern village that I lived in before moving to the Cotswolds; it is enormous having a girth of over 5.5 metres.  Despite being a British native that has grown naturally in the wild for thousands of years, yew woods are very rare – I can only think of two (although there must be others): one in the Chilterns behind Watlington Hill and the other in Sussex.  One of the reasons for this is that yew was the favoured timber for making longbows – by 1294 yew stocks were so depleted that imports were being sourced from mainland Europe. 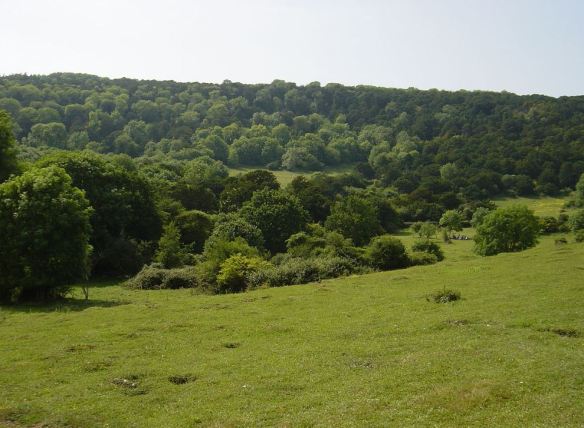 The yew forest at Kingley Vale, Sussex, England – one of the finest examples of this rare habitat in Europe [photo credit: Ben Shade]

The huge girth of the ancient yew in the churchyard at Ibstone , Chiltern Hills, England

Yew is unusual in that the individual plants can be male, female or a combination of the two.   All-male trees release huge clouds of pollen whereas all-female produce none and can be identified by their glowing red berries.  It has even been known for individual trees to gradually change sex with all-male specimens becoming all-female and vice versa.  Although the pollen clouds can be extremely irritating if caught in one, in the average garden situation where mature trees are less likely to be found the pollen release is much more limited.

The glossy red flesh is the only part of yew that is non-poisonous. It’s still not advisable to eat it!

In its natural condition yew is a spreading, evergreen tree, wider than it is tall.  However, for many centuries it has been clipped and shaped into hedges and topiary for which its regular, and when treated in this way, tight growth makes it ideal.  It responds well to being kept low, say around 45cm, or can be stopped at any height required.  Likewise, it can be clipped into neat cubes, intricate spirals as well as the ubiquitous peacock beloved by stately homes.

One of the characteristics of yew is its ability to send out new growth from old branches and even from its trunk.  This can be readily seen when the branches are parted or the main stems are exposed.  To maintain a clean trunk these growths should be pruned away before they become established.  With hedges and trees it means they can be reduced in size as drastically as you might wish although it is important to bear in mind that a heavily pruned tree may never be restored to a thing of beauty.

If reshaping trees is a skill difficult to master, restoring overgrown or gappy yew hedging only takes courage although for best results it may take a few years to achieve perfection.  Begin this process by removing all growth back to the trunk on one side only.  The hedge will now look ugly but new growth will soon sprout and the following year or in year three the other side of the hedge can be given the same treatment.  Apart from the benefit this staggered pruning has to the health of the yew another advantage is that the screening from the unpruned side means there is no loss of privacy.  The height of the hedge can also be reduced at the same time as side two cutting 6-12 inches below its required finished height to allow for regrowth.  By year five, if not sooner, the hedge will be a manageable, healthy screen once more and will continue to be so for very many years.

The first stage in regenerating an old yew hedge

As with all plants, especially those that are long-lived, careful planting is essential to give them a good start.  Yew copes with most soil types including chalk but hates waterlogged or compacted soils.  Whatever the soil, enrich with good quality compost or well-rotted manure; if any parts are excessively damp create a low bank at least six inches high to ensure the roots establish in the marginally better drained soil.  Pot-grown yews can be planted at any time of the year providing the ground isn’t frozen; the best time is mid-autumn and spring when the soil is warmer. The optimum size for quick establishment is 2-3 feet and this size also makes planting a hedge quite economic too.  With a bigger budget larger plants may be purchased.  These in the photo below are over six feet high and create an instant hedge when planted closely together.  Because of their size they are usually ‘root-balled’ and only available during the cooler months.  The hessian and wire mesh root ball should be left intact as they quickly decay once planted although the wire collar may be released if it fits too snugly against the stem.  In windy situations they may require staking; they will certainly need careful watering for the first two years of their life. 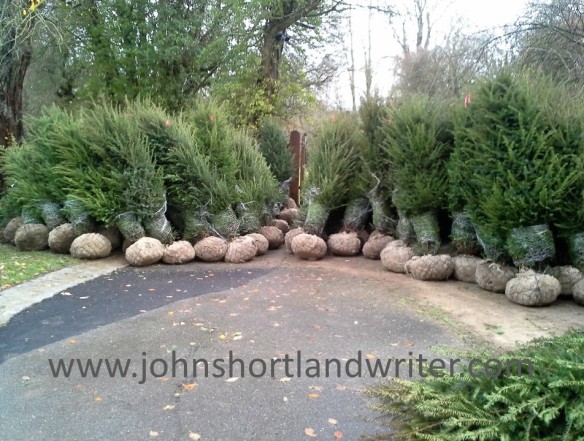 Rootballed yew waiting to be planted – they will make a fine, if somewhat costly, instant hedge

However you chose to use your English Yew, whether as hedging or as topiary, there is one common rule to clipping and that is accuracy for nothing looks worse than a formal hedge or piece of topiary that does not have clean, sharp lines.  The ideal time for clipping is August although spring is the time for restoration pruning.  One word of caution – all parts of yew are highly toxic if ingested.  It is essential that clippings are disposed of carefully for it can be fatal if livestock such as horses have access to them.  Yew clippings from regularly clipped hedges can be sold for use by pharmaceutical companies to make cancer treatment drugs.  In the past, when I was the Head Gardener of a large country estate with extensive yew hedging, we secured a not-inconsiderable amount of money over time which the estate donated to cancer research charities.  I believe that, for 2020, collection has been suspended but hopefully it will be resumed in future years. 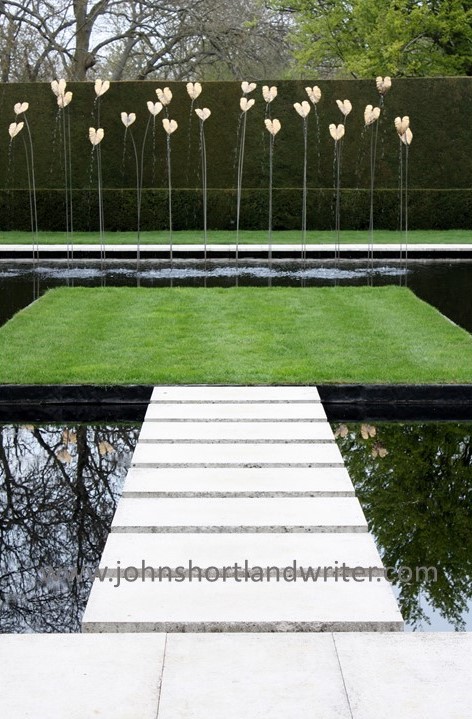