War, it is often said, is made by old men for younger men to fight and die. Although this is true, as is the realisation that many wars are wars of vanity and/or stupidity, sometimes sadly, they are necessary. As we celebrate the 75th anniversary of the end of World War 2 in Europe, we need to reflect on the suffering it caused to the peoples of all nations. We also need to reflect that just as the First World War wasn’t ‘the war to end all wars’, neither did peace in Europe bring a future of peace throughout the world. It is with immense gratitude to our parents and grandparents that the end of hostilities in 1945 brought an enduring peace to Europe and the West. However, peace is a fragile object to be nurtured and handled with great care and the recent turn of events with Covid-19, Brexit and the tensions arising from the radical changes in USA diplomacy gives considerable rise to concern. We can only hope that our leaders remember how the rhetoric of the 1930s became the reality of the 1940s. 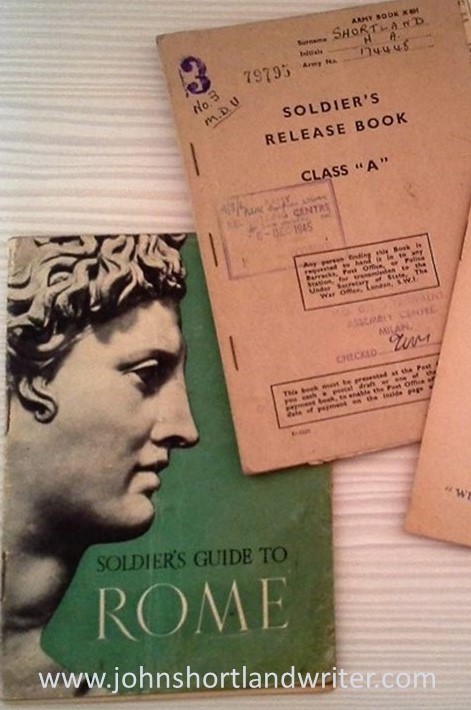 Like virtually every other family in the land, mine suffered mixed fortunes. My father, the eldest of three boys survived the conflict as did the middle brother. Sadly, the youngest of the three died, not by enemy gunfire but by his own hand in Austria. By the age of 23 he had already seen more pain and suffering (we can assume) than he could endure and the thought of returning to civilian life proved too much. He is buried in a Commonwealth War Grave beside his fallen comrades in Klagenfurt. For his parents it must have been very hard to receive the news when they had believed all three sons had survived the fighting. My grandmother received a telegram reporting quite simply ‘single bullet wound to head when unsound of mind.’ 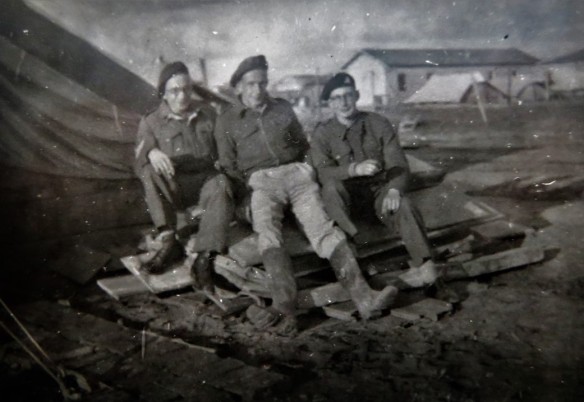 My father (middle) with his two brothers during WW2 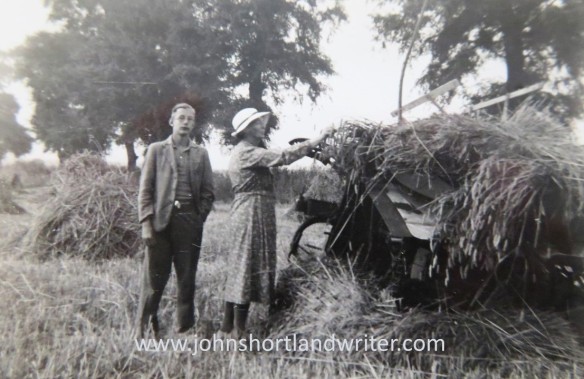 My mother’s family suffered an even worse fate. Her parents, my grandparents, were Polish Jews who had come to England around 1912 and, with my grandmother’s sister who also lived here, were spared the fate of the majority of their kin. To learn that all but three of their extended families had been killed in the Holocaust must have been an unbearable burden to be carried for the remainder of their lives. They never showed their suffering – at least, not to us grandchildren – and they never spoke of Poland or their families again. 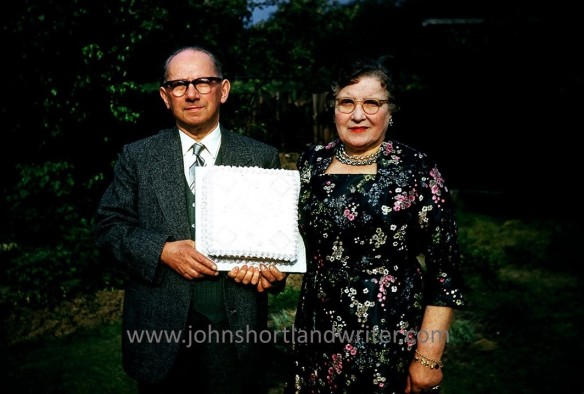 If it is hard to imagine the anxiety our forebears suffered during the conflict. It is, in some ways, even more difficult to imagine the joy, excitement and sense of relief that they must have felt as the news of impending victory circulated, followed by the reality that victory had finally been achieved. No more black-outs, no more uncertainty and, within a few short years, no more rationing. In our family no-one ever discussed such emotions but the retaining of various memorabilia stands as the record of their feelings. The letter from Field-Marshall Alexander and the Service of Thanksgiving booklet that my father kept and the left-over furniture ration tokens of my mother’s perhaps show how their priorities differed for it was always down to the womenfolk to ensure that there was food on the table and a comfortable home to return to. 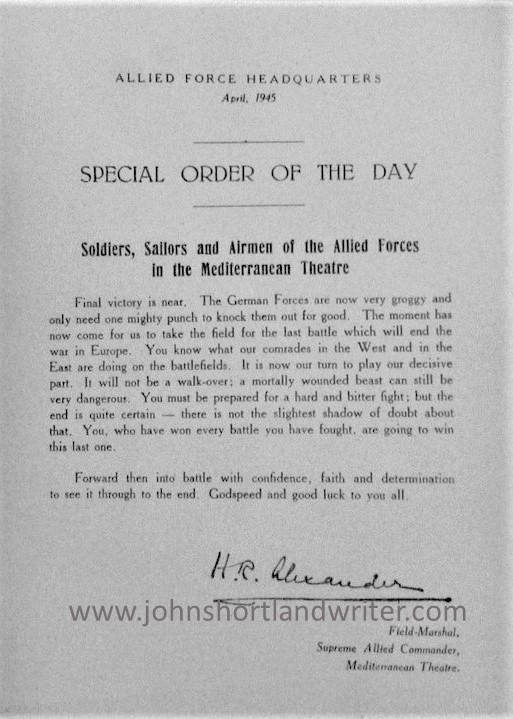 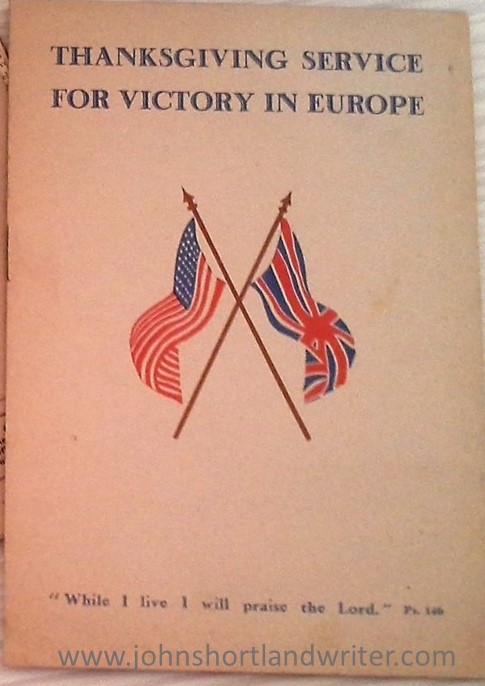 Thanksgiving for Victory in Europe order of church service 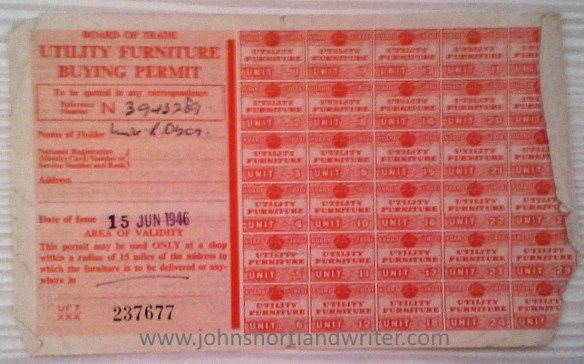 Ration stamps – everything was rationed, even furniture

This week, while acknowledging the pain and hardship of war, there is much to be celebrated on this 75th anniversary. Not only have we as a family and a nation, survived and thrived there is also much that unites the world. The internet has given the ‘ordinary person’ a much greater and louder international voice, mostly for the better. For me, it means I keep in touch with cousins scattered across the world, descendants of the Polish family that hatred had so very nearly completely wiped out. Through my blog and through Facebook I am in conversation with and have ‘met’ people from all walks of life and cultures – something that would have seemed unlikely if not impossible only thirty or so years ago. So, as we move forward from the celebrations, let us all strive for a world where peace, love, respect, kindness, concern and trust remain dominant. Wherever we are today, tomorrow and in the longer future, may we stay safe, stay well and be thankful for the peace of yesterday. 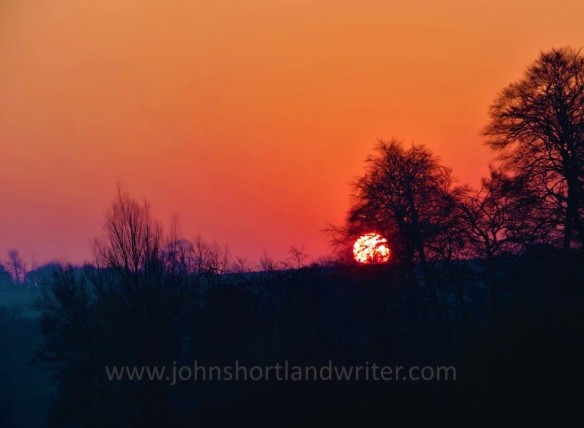 The start of a new day