With Christmas almost upon us one of the most traditional of purchases along with the tree, goose or turkey will be sprigs and bunches of mistletoe. Placed carefully above a doorway where passing under it is unavoidable many of us will be subjected to the torture of being kissed by those we’d rather not and disappointed by those that we would have liked to have been but ignored. 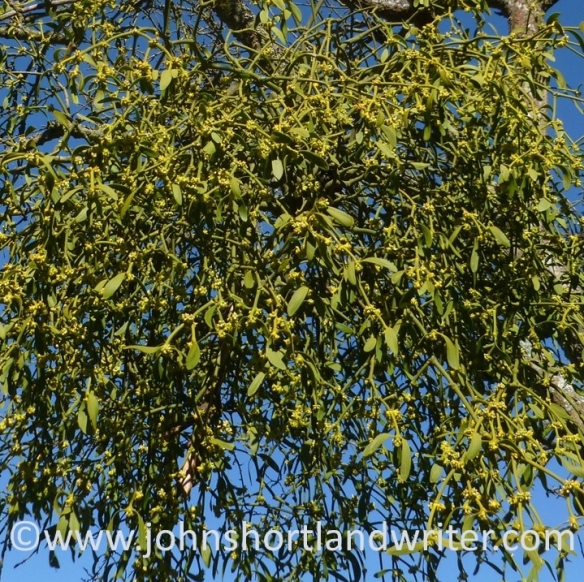 The tradition of kissing beneath mistletoe is very much a British one although it is rapidly gaining popularity (and why not?!) around the world. Our own mistletoe, Viscum album, (European Mistletoe) grows throughout much of Europe but is decidedly fickle as to its requirements. The majority of British mistletoe grows to the west of the Cotswolds, especially amongst cider orchards found in the counties of Gloucestershire, Herefordshire and Worcestershire. However, in other areas in the south, there are isolated populations where it can grow locally abundantly – the photos for this blog, for example, were taken in a garden in the Chiltern Hills. The further north, the rarer mistletoe is, being absent from much of northern England, Scotland, the Low Countries and Scandinavia.

Mistletoe is a parasitic plant – or to be more accurate hemiparasitic – attaching itself to its host tree, most commonly cultivated apple or lime. Strangely, mistletoe rarely is found on the wild crab apple, perhaps due to its more congested growth. Likewise, it is rarely found in woodland where the density of trees probably reduces the amount of light and air circulation required. Although mistletoe, being green, carries out some photosynthesis this is limited and where it grows in abundance on one tree, it can weaken the host plant and reduce fruiting potential.

In the past, mistletoe has been very much associated with fertility and winter solstice rituals and its use as a decoration is still sometimes banned in churches. The Druids held the plant sacred, especially if it was found to be growing on oak (which it rarely does). Modern-day Druids now hold a festival each December at Tenbury Wells to celebrate the plant.

Growing your own mistletoe is relatively easy for most of the difficulties commonly associated with germination are false. Ideally, fresh berries should be ‘sown’ in February. These can be gathered or purchased or you may prefer to store those from Christmas. If choosing the latter option, store them in a cool, light, airy place and rehydrate in a little water before use. Squeeze the seeds out of the berries and remove as much of the stickiness as possible; they will still attach easily to the bark. Choose young branches away from the trunk and fix to their underside. There is no need to nick the bark or cover the seeds although it is probably advisable to mark the branch in some way to identify it in the future. The seeds germinate quite quickly but it will be four years or more before any real growth is apparent.   Mistletoe (like holly) have separate male and female plants so it will be necessary to have several plants to ensure cross-fertilisation and berry production.

There are over 1500 different species of mistletoe growing throughout the world. In America the native mistletoe looks very different to our own – one of the reasons why, to British eyes, plastic mistletoe sold in the shops looks so unreal: it is modelled on the American species.

For a huge amount of fascinating information on folklore and medicinal use, advice on conservation and purchase of mistletoe seed do visit The Mistletoe Pages website where much of the above information has been gleaned.