The title of this blog is actually rather a misnomer for the picturesque village of East Hendred is, in reality, quite close to both London and Oxford.  Nestling at the foot of the Berkshire Downs, its charm and ancient houses give it the appearance of a place far from civilisation and today’s frenetic pace of life. 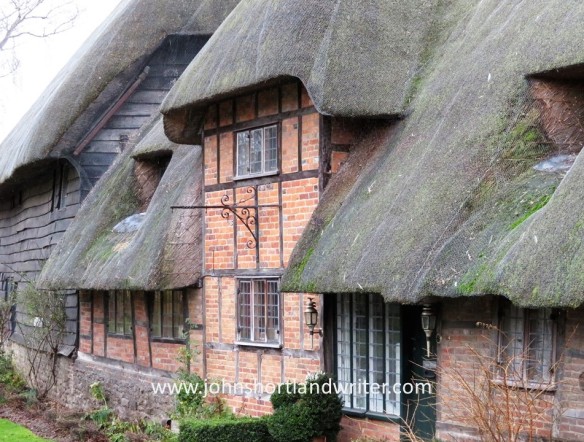 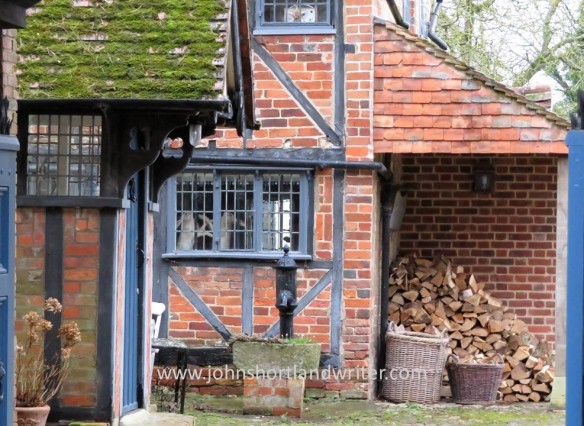 A traditional English village centres around the ‘big house,’ the pub and the church and East Hendred can boast that its manor has been owned by the same family, the Eystons, for over six hundred years.  It has three pubs thereby bucking the trend in recent years of the many pub closures elsewhere that often sees the social heart of a community destroyed. 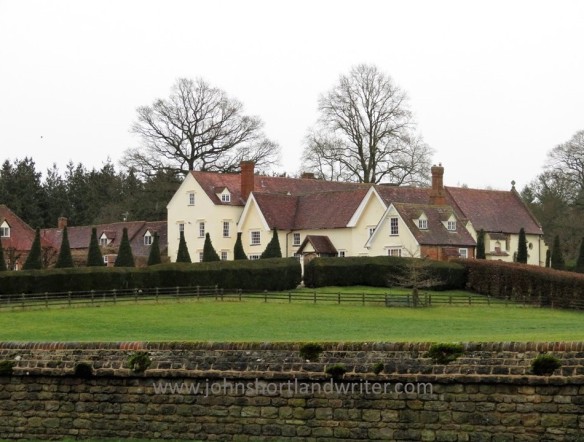 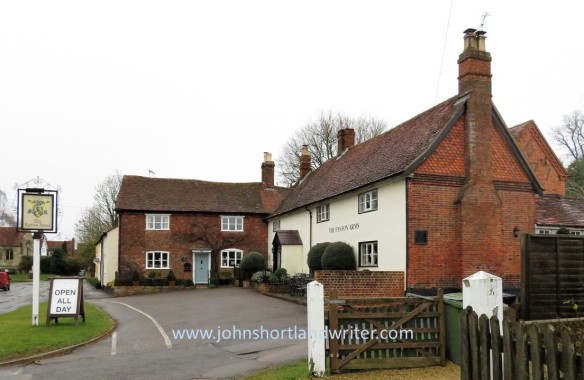 There has been a village shop for very many years for a book published in 1922 (English Country Life & Work by  Ernest C. Pulbrook) shows it in a photograph.  Today, the shop is still “thriving and well-accustomed” although it is doubtful if it now sells the wooden hay rakes that are lined up outside on the early photo!  The building has remained unchanged over the years although the village changed allegiance in 1974 and is now in the county of Oxfordshire.  The shop is easily recognisable in my photograph as being at the far end of the row. 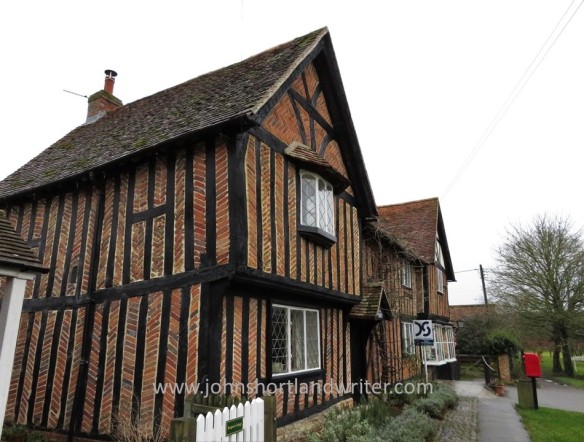 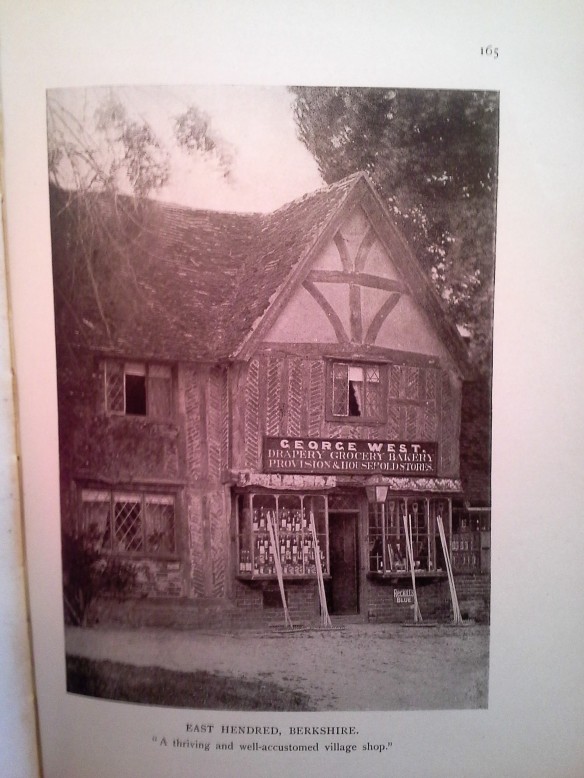 The church, dedicated to St Augustine of Canterbury, dates from the late twelfth century although its tower is later, built around 1450.

At the other end of the village is the former Chapel of Jesus of Bethlehem also built around 1450 by Carthusian monks.  Now known as Champs Chapel, it houses a small museum dedicated to the history of the village.  It is opened and maintained by volunteers.

Despite its historic past, the parish of East Hendred which is crossed by the ancient Ridgeway path (now a National Trail) is also firmly fixed in the modern day for it also houses the Harwell Science and Innovation Centre where the Diamond Syncrotron Facility is located.

For so tiny a place, the Cotswold village of Taston, or more accurately ‘hamlet’, has more than it’s fair share of interesting features.  None can be so dramatic – in the most understated of ways – than the lump of rock hurled in rage by the Norse God, Thor and now wedged between the roadside and a wall.

The Thorstone (from which the village’s name is derived) is one of a number of standing stones that litter this part of the Cotswolds.  They range in size from the extensive Rollright Stone Circle to the single unnamed stone that can be found in the town centre of Chipping Norton.

Close to the Thorstone are the remains of a medieval preaching cross.  Many were destroyed during the Puritans time of Cromwell (mid 1600s) but their base, as here, still remain. 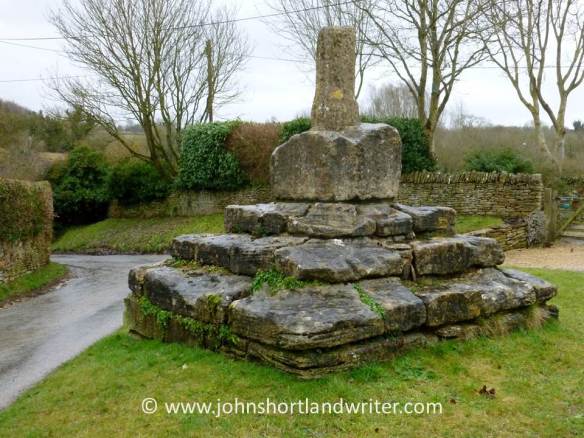 Ancient stone houses, many of them listed by English Heritage, line the three narrow streets of Taston.  Exploring on foot is the best way to see them and to absorb the villages tranquil atmosphere.  It is highly unlikely that you will meet others doing the same!

It is on foot, that you will find, tucked away beneath the trees, the memorial fountain to Henrietta, Viscountess Dillon.  Built in 1862 of limestone, granite and pink sandstone, it has the words In Memorium in a decorative arched band beneath its spire.

Slaughter may not sound the most promising of names but Lower Slaughter situated in the heart of the Cotswold Hills is one of the prettiest and most unspoilt villages you can visit.  Its unusual name is a derivation of the Old English word ‘slough’ meaning muddy patch but, if it was many years ago, it is certainly not one now.  In fact, three years ago it was described in a poll as having ‘the most romantic street in Britain’. 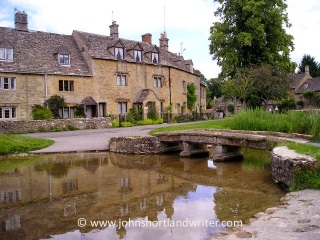 Although there is some more recent housing discreetly tucked away most of the buildings date from the mid sixteenth to mid-seventeenth centuries.  Its origins are even older  for it was well established even before being recorded in the Domesday Book; this means that it has been continuously inhabited for over a thousand years.

Many of the oldest houses cluster around the the River Eye which, although shallow, is powerful enough to feed the undershot waterwheeel of the mill.  This building, which now houses a small museum, is made from red brick – an unusual building material in this area – and was working as recently as the the late 1950’s.  It is a comparatively modern building having been built in the 1800’s although a mill was recorded on the site in 1086.  The tall chimney was built to give the mill additional steam power.

A similar tale can be told of the picturesque church with its tall spire which also dates from the ninteenth century.  There are a few traces of the original building within it: an arcade of four bays dating back to the early 1200’s.  The lichen encrusted gravestones in the churchyard also belie their age for burial rights were only granted in 1770 – before then villagers were buried in nearby Bourton-on-the-Water.

The countryside surrounding Lower Slaughter, and also the village itself, may not appear to have changed much in centuries but there is no doubt that they are very much ‘tidier’ than they once were.  An old Pathe News clip shows the banks of the Eye overgrown – there probably wasn’t the same enthusiasm for cutting its grassy banks when it has to be done by scythe.  Another change the film shows is the ‘locals’ sitting on the benches: nowadays, many of the houses are owned by the wealthy as weekend retreats and those exploring its lanes are visitors.

Lower Slaughter, despite its obvious attraction, has done very little to encourage tourism.  It is still possible to sit there or cross its little stone footbridges or paddle in the ford and be transported back to a time when life ran at a much slower pace.  It makes a very refreshing place for visitors to recharge the batteries after the crowds of its larger neighbours, Bourton and Stow-on-the-Wold or, for us lucky enough to live in the Cotswolds, to do the same after a hard day’s labour. 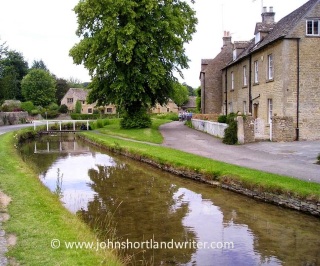